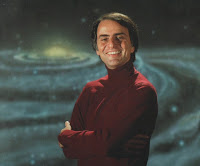 You must have chaos within you
in order to give birth
to a dancing star.
Frederich Nietzsche
The universe, filled with nebulae, black holes, and the mysteries of time and space, was begotten from atomic chaos. Billions of years ago, all space, matter, and energy in our known universe was contained in a "volume less than one-trillionth the size of a needle point" or about the size of a single atom (deGrasse Tyson, 2004). This preplanetary pandemonium would impregnate our mother in this massive cosmos - Earth's solar system. Out of this frenetic and violent chaos, would come life, order, and beauty. These are key principles of physics and astrophysics: supernovas that outshine entire galaxies are born from massive stellar explosions, their remnants capable of forming ominous black holes or neutron stars and pulsars that are up to eight times larger than our sun; and the untempered chaos of a seemingly libertine universe gives rise to the magnificence of the cosmos.
On July 27, 1994, my own universe imploded when my baby died. I've found myself present with sadness and absent words this July, as I have been during the past 14 voyages of the Earth about its star between June and August. My grief feels like the fledgling cosmos. Chaotic, disordered, confused, violently out of control. Still, I take comfort in reflecting on the genesis of our macrocosm.
Grief, like our universe, is often indescribable; it is elusive, creviced, and wordless. There exist within it many great mysteries, places unexplored and unknowable given the ephemerality of time. One pithy moment of grief gives rise to a new precipice, like a pulsar in my own universe of loss. I'm sitting quietly with this idea, and I'm reminded of Nietzsche's notion that order will come of the chaos, meaning of the confusion, and that I can, indeed, have my dancing star amidst it all.  Caret initio et fine.
RIP Carl...
November 9, 1934   to   December 20, 1996

Thinking of you and Chey this whole month -- especially on her day... At the bottom of this post, I added a jpg of one of my new paintings "Imagination Comes from Chaos"

Totally have dichotomies of chaos on my mind and heart lately...
xoxo
me

Love the art, as always! You are amazingly talented!
OXXOX

Thank you so much, Janis!

Wow. Chey died the day after my daughter was born.

My mom died the day after I discovered I was pregnant with my daughter.

I'm just sitting here at a loss for words.