God, an ant, and my daughter's death 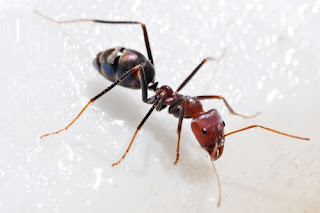 There is something beautiful about a billion stars held steady by a God who knows what He is doing. They hang there, the stars, like notes on a page of music, free-form verse, silent mysteries swirling in the blue like jazz. And as I lay there, it occurred to me that God is up there somewhere. Of course, I had always known He was, but this time I felt it, I realized it, the way a person realizes they are hungry or thirsty. The knowledge of God seeped out of my brain and into my heart.

God, an ant, and my daughter's death 15 years later...
What an odd title: What does God have to do with an ant have to do with Chey's death?
Let me explain...this weekend I found a little ant in my sink.
I don't know how the lone soldier got there, but he painstakingly- and without any success- kept trying to climb out of the sink only to slip to the bottom and have to start all over again. Exhausted, he continued to fight against his certain fate.  In an effort to help him without getting bitten, I put a small piece of tissue in the sink thinking he'd gratefully latch on and I could whisk him off to be reunited with his little ant friends in the yard.
He wanted nothing to do with my help. I would put the tissue down and he'd move the other direction. I did not relent. Neither did he. In an attempt to escape, he even crawled down the dark, dank drain momentarily hoping I'd disappear by the time he returned.
Again, I tried to rescue him.
Again, he avoided me.
So I tried to reason with him.
I said with consternation, "Now listen little ant," and continued in a frustrated tone, "I'm trying to save you here. Can I get some cooperation?"
Then I thought of what that must be like for an ant. To be stuck in an unfamiliar place, fighting to get out, fearful and confused.  And along comes a frighteningly incomprehensible (for an ant) giant who is causing even more psychic and physical pain. Despite my good intentions, for the ant it surely mustn't have felt like help at the time.
I recently read the book Blue Like Jazz and Miller made a profound point that reverberated through my mind at that very moment.  He asserted that a human cannot really understand God (particularly during the midst of a tragedy) any more than an ant can understand a human.
Hmph. A moment of contextual perspicuity.
That ant in my story could no more see the bigger picture of his own saving - despite my good intentions - than we, as humans can understand why there is so much pain in ours and others' lives. And in failing to trust, the ant was doomed.  He would never escape his present circumstances without trusting.
Fifteen years ago today, Cheyenne Cacciatore died suddenly in what would be the most painful and epiphanic event of my life. It took me many years to understand that in losing her, I found me. The trauma of her death saved me in many ways. Yet, in the painful chaos of the first years after her death, I fought against the reality of grief.  I, like the ant, could not trust. So I climbed up and fell, over and over, down the porcelain walls of loss. No where easy to go but into the drain of the abyss.
I could not see the entire picture or the potential outcomes. I could not begin to contemplate the fact that even amidst the suffering and terror, I was in the process of being saved.
I miss you Chey. Every second of every minute of every hour of every day, I MISS you.  I don't understand the bigger picture of my own saving now, but one day I will. Maybe God will pick me up gently with his tissue and set me outside, in the yard, where I can find you again and you can tell me all about the saving of your momma.
I love you. Happy 15th Birthday.

That was incredibly moving and really touched me deeply..I struggle on this journey , sometimes daily and my struggle with God has really been heart wrenching.. You are an amazing woman...thank you for who you are... thank you for sharing Chey with the world.. love you so much.

Just tears and love for and with you. Oh, the abyss of that drain. How many times??? Grrr. Must say, I am so grateful to have you in our lives. The path here was sucky, but you've saved my behind (and heart) many times and I cannot ever thank you nor Chey enough!
xo
me

Lovely post - I know some of those feelings you write about, and thank you for expressing them so eloquently.

((Joanne)) your words always so beautifully express what is in the heart of a bereaved parent, and this blog is no different. I so remember being that ant....trying so hard to climb, almost always alone from the pit of grief, until I found MISS. Thank you....I will always be grateful to you and Cheyenne and my Sarah for being my greatest teachers......

As always your post is written with beauty and thought.

Happy birthday Cheyenne- you are loved by your mom and carried in the hearts by so many more that know your story through your mom.

Beautiful, moving and profound, as always, Joanne.
Big, big love to you, and beautiful Cheyenne. xo

Thinking of you and your daughter Cheyenne.

Thank you so much for your kind words and for reading. I think every day of all our children who left too soon.

Beautiful. Happy birthday to your Cheyenne. Like you, I think of the children that have left too soon everyday. And it helps to know people think of my son when they do the same.

Dr. Joanne,
I have been reading your blog for sometime and have been so touched. I have not lost a child like you, but feel a deep grief and loss for the fact that I have not been able to conceive a child. Each month I feel that heartbreak and deep sense of loss when I realize again I have not become a mother. Although not in the same capacity, I feel the deep sense of loss and the void that nothing can heal or fill. Thank you for your poignant words and for sharing your story with so many.
Love and prayers, Laura Beth

Joanne, this was very moving.I am always amazed how we can find something so simple, an ant in a sink for example, and be brought right back to the trauma, the suffering, but most importantly, the profound - ness of our becoming who we are because of 'them'. Let us not lose the lessons when we lose the children. They do live on...... we see to it, don't we?

I just want to say that I love you and I love your precious Chey very, very much.

She did not only save your life, she saved mine as well through you. For that, I am eternally grateful.

Joanne, thank you so much for writing this. It echoes so much of what I feel - I struggle to trust God so much. I have always hoped that Luke understands why things happened the way that they did, and that perhaps some day when I'm with him I will understand too. I can only believe that have all found so much meaning in the lives of our children and in doing so we have all found each other. I hope Cheyenne's birthday was peaceful for you guys.

I just visited for the first time, less than 4 months after my twins were stillborn. I am currently that ant, and I was brought to tears by the eloquent way you've written that metaphor. Maybe one day I will be able to trust, to climb onto that tissue, but I'm nowhere near that place yet. It just doesn't seem like being saved. It feels like slowly dying-stuck somewhere cold and lonely and meaningless between life and death. Thanks for the inspiration. Happy Birthday to your little girl. Wishing you well.

Joanne, you truly are an amazing woman. When I lost Rachel 9 years ago, I read many different books and nothing helped...and then came "Dear Cheyenne". Your story, was my story. Your thoughts, were my thoughts. You helped picked me up off the floor in my darkest days and I am forever grateful for all you have done. You are my mentor and my hero. I love your blog and this recent one hits home again. You have helped countless of people and families by opening your heart and sharing your words. Thank you...and happy birthday to your sweet Cheyenne!

It's as if you have a window into my heart - and always have the words to help ease the pain a little. Thank you for letting us see into your journey - hoping I can continue mine with even an ounce of the grace you do. Thank you!
-Karry

Like Carla said, Cheyenne saved my life too. It's because of her that I met you. The ripples are continuous.

Thank you everyone for your kind words of support. Just- simply- thank you.

Thank you for sharing this. I needed to hear it today. Bless you and bless your Chey.