From Research to Practice: The system actually works! 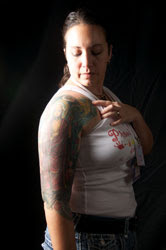 Long ago, in a little Mexican restaurant, the smell of cilantro and lime dancing across the room, while normals around us laughed over margarita lunches, I met her. And the collision of two lives - and two deaths- would incite a paradigm shift that would change many other lives.
Rewind to 2004 when I was contacted by a grieving mom, Jodi, after the traumatic death of her daughter, Nia. Jodi and I would go on to form a therapeutic alliance that was very private. This was because Jodi was both a lesbian and a grieving mom.
Over the course of several years, I came to realize how unique her experiences as a single, lesbian, mother of a dead baby were... and a research study was born.
The manuscript, set to be published in a top tier academic journal early next year, was based on a qualitative, exploratory study on this subculture of the bereaved. All because of Jodi. Well, actually, Nia.
Here is what I found in the abstract:
____________________
Research on parental bereavement has focused historically on single or partnered, cross gendered (heterosexual) bereaved parents (Rando, 1986; Miles, 1978; Donnelly, 1982; Knapp, 1986). No studies to date have yet been conducted on the unique experiences of same-gendered bereaved parents. This multiple case study focused on child death in same-gendered parent families. The goal of this study was to yield information that will expand on the existing body of knowledge regarding parental bereavement as well as add to the dearth of literature on lesbian parenthood and challenges that lesbians may face as a marginalized group. This research study was conducted using in depth interviews with six self-identified lesbian mothers who have experienced the death of a child at various ages and from various causes. Results suggest that lesbian bereaved mothers experience a type of double-disenfranchisement after their losses, and that social support is often insufficient to meet their psychological needs. Because previous research has not been published on this specific population, the findings may be worthwhile for both the lesbian and gay parenting community, community advocacy groups, and clinicians who serve them.
__________________
Now, lo and behold the system actually worked!
From micro-practice ------> hypotheses --------> research --------> outcomes ---------> practice.
Thus, Nia's death gave birth to an support outreach for a doubly disenfranchised group, featured in Echo Magazine.
Now this is how the academy is supposed to work!
Margaritas anyone?
Oh, and thank you Jodi. Thank you Nia.

Jo, there are no words. Thank YOU for listening, for being who you are. In learning about my struggles, you sought to do what you have done in so many things where you have found a need, an injustice. You sought to understand, and to bring to light the gaps that prevent grieving parents from receiving the support they so deserve. There are not many people would have been as open, mindful, aware, and purposeful as you have been. I cannot tell you what it means to me to know that Nia and I inspired your work in this area, and the change that this work will bring to the lives of other LGBT bereaved parents. It truly fills my heart in a way that I will never be able to express, Joanne. It would be neglectful of me to not acknowledge your precious Cheyenne. After all, just as this work was born through Nia's death, Cheyenne is the miracle that made our karmic meeting possible. While I will always wish that we had never had this reason to cross paths and that our daughters were here with us, I will forever believe in my heart that our children (literally) brought us ALL together. It is in these moments that I reflect on the meaning of my daughter's beautiful name. Purpose. Indeed.