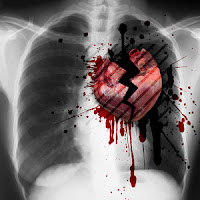 The world breaks us all,
and afterward some are stronger in those broken places.
Ernest Hemingway
I remember the day with piquant detail. The first smile after she died, cracking my cheeks, splitting my skull in two. I felt as if I'd committed an act of desecration, voyeurs witnessing my fait accompli. My dead child in her pink satin casket lay there lifeless. And I smiled.
I do not recall who caused this act of irreverence- or what they said or did to prompt it. I only remember standing outside of myself in shame. Smiling is an act of the living. I was not alive; I certainly felt dead.  But the dead do not smile.
I knew in that moment I was not one of the dead. No matter how much I beckoned, I knew Death would come on its own will.  I also knew that I was not amongst the real living. I existed in some liminal place between breath and stillness, extinction and existence, nether and numinous, and life and death.  I was broken, irreparably shattered.
For months, I wandered through the valley of the shadows as I vacillated between the world of the living and the world of the dead. I struggled to accept life's mediocrity, longed for my now fugitive naïveté, and wished for ailments of trivia instead of trauma.
What glue could hold those broken places? What stitch would ensure proper healing? What concoction would purge me of the pain? Which God could heal my suffering and despair?
It would be many months before smiles would come again. But they came. Slowly and painfully. I did not want others to assure me that it was okay to smile and that I should move on and be happy in my life. This, I knew, would one day be my truth. But I was not ready yet. I needed pause. Her life and death were worthy of this interruption in my previously assumed entitlement to an untainted, joyous sojourn. Instead, I wanted others to accept my shame without judgment, to hold a place for my broken, sometimes irrational, state of mind. Often, they could not. Like a leper, raw grief frightened them.
Nevertheless, I would not accept their platitudes or poisons. I rejected their attempts to tug me toward the future faster than I was ready. I refused to abandon my brokenness in exchange for cheap glue or careless stitching. I indulged in time and tears and tribulation. I became a seeker of healing that would endure, not healing that was shoddily constructed with plastic words, or pills, or even a magic wand, susceptible to rebreaking under the slightest pressure.
What I've realized over the past 14 years is that it was the very grief that frightened them- that raw grief which seeped from my broken places like blood spilling from a wound- that truly healed me. I have become stronger in my broken places.  And I am smiling again.

This. is. an. AWESOME. post, Joanne. Breath-taking. I reveled in every word, even though I cannot smile yet.

Joanne,
This post really resonated with me. Today I felt SO strong, stronger than I ever did before Sage died. I felt my own grace and . . . power.

Several responses arose in me: confusion about feeling strong NOW, 90 days after the death of my son, doubt about whether this strength is real or some elaborate defense my mind has created, and then something like resentment for the fact that I had to lose my child to know myself (better).

Since the accident, I've gotten some of the things I've most longed for in life: a strong community, a sense of purpose in my life, and a deep awareness of my own strength. And these things bring me some happiness. But at what a horrific cost . . .

What can I possibly say?

Thank you for sharing your moments of grace- and power- with me. I hold you and Sage in my heart. Always.
J

Once again, you name things for me.
You wrote ME, in those words.

The universal language of a mother's grief resides in this post. Thanks Joanne.

Thank you Angie for sharing tears and smiles with me.

I look forward to sharing some in person.

Holding Dallas in my heart...
J

"I wanted others to accept my shame without judgment, to hold a place for my broken, sometimes irrational, state of mind."

I realize after all these months (almost 2 years) that this is all I've longed for. It's the reason I don't have my best friend anymore. It's the reason my relationship with my Dad is non-existent. They ran away as fast as they could as soon as they saw my grief and how raw it was. That's sad.

Thanks for visiting me in my personal space and thank you for this blog along with your thoughts.

Thank you for all the work you do on behalf of all the moms and dads who have lost their darling babies to being born silent. Your writings are so true and thank you for posting them for all of us to share. Missing Lucy.

Thank you Monica and Cyndi for visiting the site. I am truly sorry any of us need be in this place of such sorrow...

As always you read my mind and heart. We traveled to one of the other islands today for a photo shoot on a film set. It was a long day. At the end of the night, we were the last car to get on the leaving ferry and were relieved to not have to wait because we were both tired and longing for home.

As we pulled in and parked behind the honkin' Land Rover, a mother got out on one side, a father and baby out of the other. All meeting in the back, putting the rim down, laying towel to change a diaper, and up from the back seat popped a young boy. The mother said something to the young boy and we were both struck with lightening.

Was it possible? Could it be the tall, blonde, wicked witch of the west, the horror who ran a large division of the company where we both used to work, where we met, where we visioned our marriage and son? She was such a monster back in the day. And yet here she was.

Was it really possible? Young boy in the back -- maybe 9 years old? The age our son should be. And another baby now, too? And a honkin' Land Rover and whiny voice as annoying as ever?

OMG the hate seethed from me.

What kind of world can allow that?!

I've been doing this experiment in blessings. Bless everything you would once have cursed. Gosh, I tried, Jo, really I did. I tried so hard. I tried to look at the innocence of the children and bless them. But nothing raged in me but hate. It was awful.

I'm so exhausted. Bed will be a good healer tonight and maybe tomorrow I'll find the strength in the broken places and come to some different place about it.

But wow. Just in that moment, I was so broken. And just needed the world to hold my brokenness and let me seethe.

I don't know... just knew you would understand -- and seeing the image in this post -- well, you are reading my mind and heart.

Oh Kara- I am so, so sorry. Nine years old. Boy. Stinging. It's so unfair. I cannot imagine a more beautiful set of parents to their son than Kara and Hawk Jones. I wish he was here. I just wish...
XOXO

This was such an eloquent description of how I feel. It's like I need to feel my grief to honor my daughter. And I know people are wondering why I am not "better" yet, but it's mostly due to their own discomfort when thinking about our pain. I don't want to not feel it, I don't want to erase my memories of her. Thank you for putting these feelings to words.

What beautiful, touching writing! I noticed you posted on my Rubybleu Blog...thank you! You are doing amazing work, in the context of Rebirth . Take care,
Katalin
www.rubybleu.blogspot.com
www.earthweaver.blogspot.com

CLC...I really relate to what you said. Grief sometimes feel like the cord that connects us to our children. I know, for me, there were times I felt that the pain was all I had left, and if someone took it from me, I would dissipate into nothingness.

Thank you for reading...I am so sorry...

Thank you for this. It spoke volumes to me, I could relate on so many levels. I feel like I am under a microscope sometimes, with people inspecting me, trying to determine if I am coping "the right way" or comparing me to others. I even had someone compare another lady who had a stillbirth the same time as I did with me, telling me that, "She's just not handling this as well as you." And all I could think was she was just more honest and not as accomplished a liar as me. I love where you wrote, "I needed pause." Exactly! They deserve that much, a pause in life as we know it before life continues as it will now become.

WOW wow i get this. I wish i did not.
ANg