These are the Days of my Dead 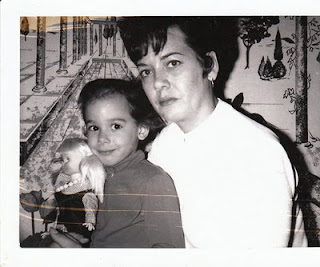 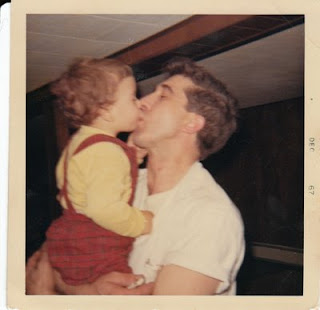 Daddy and his little girl 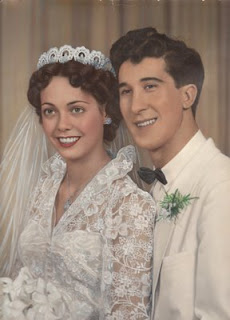 Josephine and John, fifty years of marriage
When bad news- really bad news- arrives, it often arrives within a framework of relatively predictable patterns of insensibility, a type of  emotional novacaining.  Disbelief and anesthesization- it just cannot be. Depersonalization- out-of-body experiences. Temporal distancing and alterations- a wrenching of of time and space. From these acute responses is born a cascade of emotions, a rollercoaster of ups and downs, inside outs, and all arounds. And of course, when looking backward while on the Hadesian ride the view is different. I realize that every loss I've ever had is deeply entrenched in my identity, and that disentangling one from another is nearly impossible. So this time of year conjures up sensate memories of all my losses, including the death of my parents.
On October 31 of 2001, as my four young children were amassing sweet delicacies from generous neighbors and committing acts of friendly tomfooleries, my phone rang.  My mother collapsed in her living room, and paramedics were transporting her to John C. Lincoln hospital. Together, Ari the ogre, Cameron the werewolf, Stevie Jo the kitten, and Josh the reluctant, purple Barney from public television, and I rushed into the emergency room, catching a glimpse of frantic blue shirts screaming at one another and yelling my mother's name as if angry with her, "Josephine! Josephine!".  Shock and terror descended on the waiting room as the moon lit the parking lot where candy-filled bags waited patiently in the car to be devoured by the costumed children.
For four days, my mother lay lifeless, tubes down her throat and in her arms, and iron lung machines forcing oxygen into her broken body. Her eyes were open, but her brain, in the ultimate act of defiance and apostasy, rejected any attempt at communication, affection, or pleading.  The people she'd loved her whole life- the children she bore- the grandchildren she watched come into the world- the man she loved for more than fifty years- were strangers in her world of insentience.  No amount of hoping, prodding, begging, praying, or commanding would change her condition.  On November 4, 2001, we said goodbye.  And in an apropos, but evanescent, moment, I witnessed as she took her final, laborious breath, just as she was with me as I took my first.
Four years to the day later, on November 4, 2005, at 5:00 a.m., my niece, Amy, called. I knew something was wrong by the tone of her voice. "Papa is dead," she said. "What? What? No, no, no, no, no!" I screamed in futile protest. Not today. My father died suddenly during the night. My former husband took the phone and I fell to the ground sobbing. I tried to dress myself but couldn't think clearly enough to put my own arms through the top of my shirt. David tried to help, to calm, me. Again, I faced another goodbye for which I was wholly unprepared. The man who walked the floors with me when I had a fever. The man who would give me his last bite of chocolate cream pie. The man who would let me sneak into the bed next to him, pretending he didn't notice, when ghouls and goblins came from my closet to accost me. The man, with his doctrines and dogma, against whom I would rail during my rebellious teen-years and beyond. I sat next to his bedside, weeping over his cold, dead body. In that moment, I was transformed into a frightened little girl. Not all the pleading or negotiating or acts of contrition in the big Universe could incite Death's capitulation. My father was gone.
Not even four decades had passed since my own birth, and I found myself an orphan. My children, grandorphans, would live the remainder of their lives without really knowing my parents.  The mounting losses are, at times, too overwhelming to realize.
This time of year is melancholy for me.  I ruminate, despite repeated attempts at deflection, on the culmination of my losses: my parents, Elisabeth, and mostly my precious daughter. There are layers and layers of grief for my dead which, like both buried pain and buried treasure, are still undiscovered. I miss them. All of them. There is so much more mourning to be done. While bearable, tears still fall like rain, blurring the words on the screen. At times I intentionally immerse myself in meaningful, distracting preoccupations. But not today. These are the days when I will remember them.
Yet, I am mostly at peace even amidst the mourning that bites. I don't have the same acute reactions to these losses, of course. Like looking backward on the ride, the grief has changed form. It's become more pliable, quieter, more cooperative. Still, I miss them and I wish it wasn't so for me, for us. And that is okay.
These are the days of my dead. These are the days of my dead.

Thank you Janis. Thank you.

These are melancholy days. I think Fall tends toward the sentimental and quiet sadness, and suites grief well. My sweet Liam will always be painted on the Autumn leaves, as your mother and father must reflect in the golden light that shines for you.

I know the pain of losing a parent - my mom died nearly 12 years ago. I do not yet know the feeling of being an orphan. That is a day I dread ( my father is 93)

The grief does change, settle in and become part of ourselves.

Thank you for sharing your thoughts and feelings in such an eliquent way. I hope these Autumn days are gentle to you.

xoxoxxox
so many float to my vision now.
but yes it is different.
a slope rather than steep slant.
or something.
waves and waves of Reiki to you!
xoxoxoxo
me

Thank you for sharing this. My heart goes out to you as you spend time honoring those you miss and love so much.

When my own father died three years ago, I was shocked at how orphaned I suddenly felt. How orphaned I still feel. I still have my mother but losing half of that magnificent whole left me reeling. I miss him every single day. I often think about the quote at the end of "A Prayer for Owen Meany".

"Oh God, please give him back! I shall keep asking you."

I love Amy's comment above about how her Liam will forever be "painted on the autumn leaves." That is exactly how I think of my own son and daughter, my forever Fall babies.

Thank you Kara, Lori, and Amy for your kindness, compassion, and for visiting. I am filled with gratitude. And I will keep your beloved children in my heart...

hugs to you Joanne.

Maybe halloween really is a time when the veil between the spirit world and ours thins.

So eloquent, so poignant, the telling of this piece, in the story of your dead.

I should cease to be amazed at your ability, to tell the story for others, in the telling of your own.

Thank you for this piece.

existence is void of meaning and purpose - create meaning - and void will be of lesser threat - great post.

I have come here from a comment that you left on my blog.

I have just read some of your writings. I guess you would get this all the time, but thank you for your insight into grief and your heart that seems to be filled with so much honesty.

I never want to even imagine losing my parents at such a young age. In fact I don't ever want to imagine it. Life can be so hard. I treasure my parents lives and today you have really reminded me to do just that.

Thank you for starting MISS. I have found many special people that I now hold dear to my heart, even if I do live an ocean away.

May your heart be filled with peace

Much Love and Hope

A very beautiful post.
I remember all our babies.
ANg

Thank you so much for commenting on my blog. Your words exuded compassion. I have just come across your blog and have found much solace reading your posts. This particular post gives me so much hope. I am so grateful.