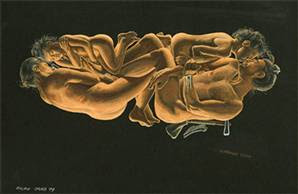 An artist's rendering of the likely burial position 4,600 years ago 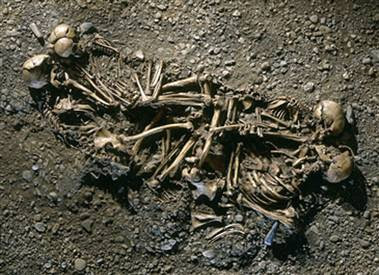 Come out of the circle of time
And into the circle of love.
Rumi
Scientists have discovered a burial site in Germany that tenderly held the remains of a Neolithic family who died, apparently together, in a brutal attack about 4,600 years ago. DNA evidence gathered at the site suggests that the four were related: mother, father, and two children. They were carefully buried facing one another. " "Their unity in death suggests unity in life," the researchers asserted.

While the idea of core nuclear families during this period of human history may seem an unusual archeological discovery, family scientists, myself included, are not at all surprised by this finding. There is something timeless and pure about a parent's love for his or her offspring. Something that is able to withstand any force that rises up against it- even, or perhaps especially, Death.

This is simply stunning and moving on so many levels, Joanne. I simply love everything on your blog. xoxo

Thank you Janis...I tried to imagine this morning...4600 years ago...a mother, so different from me in so many, many ways- agrarian, limited language, primal tools, with the absence of technology- yet, the most important things in common- love and attachment for her children. It was really an evocative moment for me...

I think this is incredibly beautiful. If I were to die with my husband and two girls all at the same time, I would want to be buried with my arms around all of them. I would want Christian's ashes to be placed on my heart too. Thank you so much for sharing this.

I tried to just leave a comment but it didn't work, I thought I was a pro in this area!

Anyway I wanted to say that I think that the above images are incredibly beautiful. If I were to die along with my husband and to little girls all at the same time I would want to buried with my arms around all of them. I would have Christian's ashes placed on my heart too.

Thank you for sharing this beautiful, beautiful story.