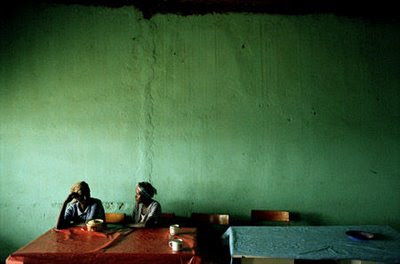 Forgiveness is one of the most important first steps
to ending conflicts
within ourselves,
and within in our families,
and within our communities,
and between nations.
-- Robert Alan
1994 was a bad year around the world. While I was suffocating with my own grief following Chey's death in July of that year, unspeakable atrocities erupted in Rwanda, where the Tutsis were being butchered en masse by the Hutus.
Dread and despair amassed in a small African country where genocidal unrest would leave nearly one million Tutsis dead. Amongst those dead included all five children of a remarkable woman of Tutsi descent named Iphegenia Mukantabana.
During the uprising, a Hutu militia that included Mukantabana's neighbor, John Bizimana, armed themselves with clubs, hoes, and machetes and murdered all five of her children, her husband, and many others in her village. It was an inconceivably violent slaughter that would last for 100 days at the behest of the Rwandan government.
Years later, Mukantabana took a remarkable step toward forgiveness for her neighbor, Bizimana, the man who took the life of her entire family. And, after serving only seven years in jail for the murders, Bizimana went before the city council and asked Mukantabana for her forgiveness. She granted that forgiveness. And she transcended it.
In an effort to promote peace, Mukantabana, a master basket weaver, agreed to participate in Path to Peace, a cooperative effort that joins Hutus and Tutsis together to benefit Rwandan children and families. Mukantabana now weaves baskets in her village with Bizimana's wife. Together, they have helped to employ more than 2500 weavers, raising much-needed money and support for education, HIV/AIDS, and for healthcare. More than that, they have created a milieu in which reconciliation and forgiveness can flourish.
I am startled by human endowment. It feels nearly supernatural to me, this forgiveness for such a heinous crime against her family. I do not honestly know if I would have this within me. Mukantabana credits her faith; And while I do not understand, I dare not question. Rather, I only stand in awe.
And I am reminded that peace- true peace- will only be possible within and between people. Peace will not come from institutions. It would be an grave and improvident error to anthropomorphize: Governments do not have the capacity for compassion, or kindness, or love. Governments cannot offer peace, nor harmony, nor tolerance. Nor forgiveness. In fact, a brief review of history will demonstrate that governments have most often brought systemic angst and despair to its people through manipulation and coercion. Divisiveness. Slaughter. Impoverishment. Exploitation. Oppression. Fear. It is not this machine that will change the world. The machine cannot feel. Rather, it will be conscious, courageous, and intentional human beings who change this world in which we live for the better.
Only people - with the possibility for those insuperably human traits of compassion, kindness, and love- can create peace, and harmony, and tolerance. These are the consummate qualities of humanity, what it really means to be a person.

Only people can forgive.

I love to come here, not just to read about what is on your heart at a certain time but I come here to learn as well. Honestly I feel like I am getting a free tutor into life and living and loving.

Thank you for sharing this story of such a truly amazing woman.

Much love to you x

Thank you so much, Carly. You too are an amazing woman. Have you any idea the lives you've touched?

For all the children,
JC