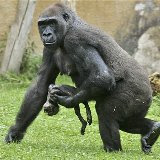 In a small zoo in Muenster, Western Germany, Gana, a gorilla is "refusing to let go of her dead baby's body" even after several days postmortem (Associated Press, 2008). Gana's baby died from unknown causes.  Despite the newly born male's death, his mother, nearly ritualistically, carries his body everywhere she goes. Zoo officials note that this behavior is not uncommon to gorillas.

According to them, Gana "is mourning and must say goodbye."   The baby was named Claudio. Indeed, sometimes even animals understand love better than humans.

yeah, I've been sitting with this photo for two days now. there is something stirring in my finger tips about why it is that Gana isn't being rushed, but we were rushed with our baby. Did we not deserve to be treated at least as well as the gorillas are treated when this happens? anyway...
oxoxox
me

This is such a sadly beautiful story...that Gana is able to hold her baby and say her goodbyes until she is "ready" (is a mother ever ready..??) to give her baby for burial is so precious.

Kudos to the Zoo staff for allowing her to mourn and for being there to explain to visitors.

If only we treated our humans so well.

*sigh* are we ever ready... nope not me a year late i am still not ready to let my daughter go. but yet i had to.

How does one "get ready" for such a goodbye? There just aren't any answers.

But I do know that allowing a mother's instinct to slowly emerge, without rushing, without judgment, without influence can be very powerful...

This image is so moving to me. You can see the pain in her stance and her face. Thankyou for sharing this. It touched my heart for some reason!

I saw this on another bloggers blog. It is truly beautiful. I was fortunate to have my baby in my room after delivery and up until the minute I was discharged. My doctor even asked me if I wanted to stay in the hospital another day to be able to stay with my baby. But, I couldn't at that time. Now I wish I would've stayed and held him in my arms.

Very moving to me. If only such generosity was instinctively and routinely extended to the human animal.:-(

Wish I could of seen my babies let alone held them, breaks my heart to see Gana's pain.