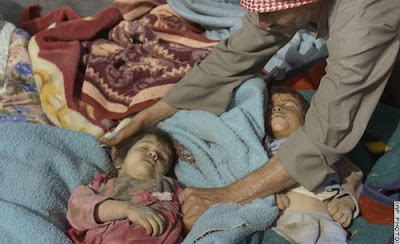 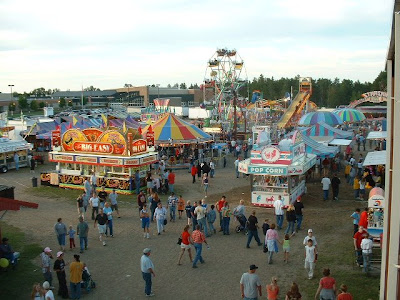 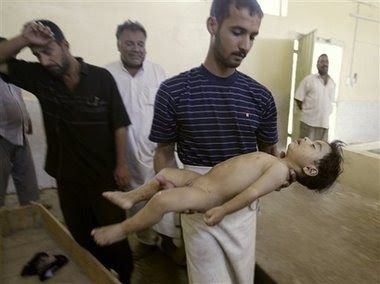 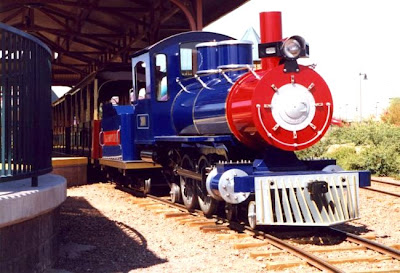 I took my son to the fall carnival in Anthem, Arizona, a magical event to celebrate the transition to cooler weather from the long and relentless desert heat. I let Josh and his friends run and play in the park as I sat under a tree reading a book about Freud and Jung. Children to my left were standing in line for hair-raising rides decorated with flashing lights and wild music. Masked children to my right were dancing to the Monster Mash as proud parents watched and grand parents gloated. Sticky-faced children ate their pink cotton candy and red-patent apples. It was a smorgasbord of panoramic festivities. Laughter filled the air and shadows leapt on concrete. Several fighter jets from a nearby military facility graced guests with a gratuitous fly-over.
"How bizarrely ironic," I thought to myself. Military jets flying above the heads of hundreds of people, families, here in Arizona. There was no fear, no terror, no bloodshed or bombs dropping from the sky. No. Not here. But in Iraq (or Afghanistan or any other country plagued by war), nearly 8000 miles away, there are no family festivals, no enchanting rides, and no tooting community park choo-choos with giggling children on board, led by a strange bearded Santa-type iconoclast.
My son approached me, drenched from water toy combat with other boys at the playground. And I realized that somewhere in Iraq an 11-year-old boy, just like my own, was also drenched. Drenched in his own blood. A wound that is not pretend, that will not heal, and that will cost his family the ultimate price. I looked around and really saw... our children were playing. Our children were eating. Our children were joyful, laughing, unscathed, and fully-limbed. Our children were privileged with abundance.
And as our children enjoyed their comfortably cool fall day, somewhere in Iraq children, countless numbers of them, were dying. Starvation. Bombs. Disease. Lack of clean drinking water or electricity. Scarcity. Luxuries of our lifestyle are the antithesis of the suffering, terror, and death in battle spaces of America's choosing such as Iraq, Somalia, and Afghanistan.
War is ugly. We know this. But how many are willing to truly contemplate the cost? Truly? Wendell Berry, in The Failure of War asks:
"How many deaths of other people's children by bombing or starvation are we willing to accept in order that we may be free, affluent, and (supposedly) at peace? To that question, I answer pretty quickly: none. And I know that I am not the only one who would give that answer: please, no children. Don't kill any children for my benefit."
"We seek to preserve peace by fighting a war, or to advance freedom by subsidizing dictatorships, or to 'win the hearts and minds of people' by poisoning their crops and burning their villages, confining them to concentration camps; we seek to uphold the 'truth' of our cause with lies, or to answer conscientious dissent with threats and slurs and intimidations."
Berry goes on to answer his own question: Is there any reason for which he could surrender his own child's life to war. "No," is his clear response.
I cannot imagine a more necessary time in history for a radical change. It begs the question in my own heart: Is the life of an Iraqi child any less worthy than the life of my own?
I must also answer a resounding no.
And I packed for home, placed Sigmund and Carl in my bag, and walked to the car, past children doing the Monster Mash, juxtaposing joy with thoughts of war.

My heart, my heart, you are speaking my heart here. It has never made sense to me. How can the people who start wars justify it? How can the people who fight to stop war (by fight in it) justify it? Where does it stop? How does the violence stop violence? How does the death and grief stop death and grief? How do we bring stable road systems and clean water where only blood is spilling? Why would anyone want to commit to shedding more blood and not letting clean water come in?

I know it isn't simple.

But isn't it really simple?

I don't know. And I find it so mixed up and convoluted to believe that and feel that when I am here in the privileged abundance.

If only we as a species could embrace love and peace. Not war for peace, but compassion for peace. We are all humans living in our home called Earth.
I do think about our lives here in the US, full of food, entertainment and parties...then I remember there is a war going on. TWO wars going on. It seems so unfair.

Those pictures are heartbreaking.

My heart is heavy reading this...the photos are so heart wrenching.

That was so powerful, Jo. Thank you for your marvelous words put to the exact feelings I hold in my heart as I tirelessly stand my ground against this war.

Be sure to check out the links. Some of the most amazing reading to be done on this subject...

Against any war other than self-defense, right? I mean, how many 40-60 year old men would sign up for the military? Some, but not many. What are we doing to young men and women who are surrounded by such trauma and loss that they will never get the sights, smells, and sounds out of their damaged brains? There exists both the damage seen and damage unseen. They can calculate the cost of war in some ways, and in other ways, the costs are completely incalculable...there simply aren't enough numbers on any calculator to do so...

Thank you for writing this. I simply cannot bear that other parents experience the death of their children, and it strikes me as unacceptable that some parents might expect that a child of theirs will die. It's just wrong. I looked on the pictures not with horror, but a sad understanding. I've seen those expressions and remember those expressions on my face. It's just wrong.

MGI- discontents, indeed. That is my favorite of Freud's work. Raw, honest. And suitable for the time.

Caitsmom-- wrong, wrong, wrong. Even across oceans, languages, and ritual, it's recognizably wrong.

So meaningful, so sad, so beautiful... Thank you.

You never fail to take my breath away, Joanne. This is such a powerful, truthful, poignant and beautiful post. Thank you for this.

Horrible reality. That's all I can think of when seeing those pictures. No parent should EVER experience the loss of their child or children. War is senseless. I don't understand the neverending circle of violence to stop violence. It makes no sense. I don't get it and hope I never do. Babies and children are dying for no reason. Thank you for being brave enough to share such a moving and thought-provoking post.

After my son died, I kept thinking how I expected him to grow up. The U.S. is fairly safe. But in places like Iraq, mothers do not have the same expectation. They do not worry about losing one child. They worry about losing their entire family. I've looked at pictures like these on the Web and know that I can't begin to comprehend the fear those moms live with every day. Sometimes I think the American public needs to see these images more often. Thank you for posting them.

You are so right. I cannot tell you how many times I have had the same thoughts. No child should die. And no, there is not one child in Iraq or Darfur--or anywhere else in the world where children live daily with the horrors of war--there is not one whose life is worth less than my own children's. When, when will it stop? Those pictures are heartwrenching.

I first read this blog post the day after you wrote it, and I wrote my own blog post about it on my private blog, and how this affected me so deeply.....and today, I was browsing my blog, reading old old posts and read my reply, linked to this, and had to come back and re-read it....I cried again, just like I did that first day I read it.