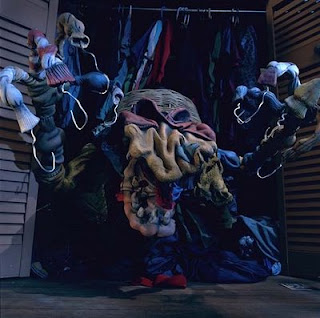 I can remember being a young girl fraught with anxiety over monsters that lurked in my closet. Once the lights went out, my wildly vivid imagination transformed plaid dresses into horrid gremlins with gnashing teeth, and shadows incarnated on the walls as the room closed in around me.
All I needed to do in order to escape the wraith assailants was to close my eyes. But I could not. I felt compelled to look into the darkness as I awaited my dreaded fate.  Would the monster devour me, limb by limb? Would he carry me off to the netherworld?  What would become of me?
The staring into the darkness did not end in childhood. Rather, this tendency has persisted throughout my life.  But with age, mostly, comes wisdom. I have mostly learned to face my Monsters; to confront those places that scare me. Mostly.  I still stare into the darkness, sometimes paralyzed with fear and anxiety.
But I've learned that by confronting the Monster-of-the-Month, he's not so scary after all. In fact, when I turn on the light and invite him to sit on my bed and have a chat, he looks and feels very different than he did in the dark. He's softer, gentler, and he doesn't devour me. In fact, sometimes, he teaches me. Oh, it might be a painful process: turning on the light- taking those intrepid steps toward the switch- may be, at times, terrifying.  It seems, though, better in the end to become familiar with him rather than to remain unenlightened.
The places that scare me the most are also the places of often unexplored territory, unmet potential.  I try to remember that a Warrior opens herself (or himself) to experiences of the unfamiliar. A true Warrior is willing to take the risks necessary to grow. It is in those places, where the Monsters have taken residence, where we can ultimately discover unbreakable truths. Sister Teresa of Avila calls these the "treasures that lie within".
So, in the end, the Monsters that the Warriors befriend may hold the key to our contentment. How's that for antic (Pixar) irony?

"So, in the end, the Monsters that the Warriors befriend may hold the key to our contentment."
I know that to be absolute truth. I wish I had not fought against that truth for so many years, delaying my own peace and contenment.

Once again, I sit in awe of your gift. Your words pierce the soul, and I know you inspire many on their journey.

Thank you Natalie. We all fight against it. It's natural. As we grow (through pain) we learn to surrender, don't we?

I've decided this year that I gratefully and very outloud am glad to stand guard at the mouth of the Dark Cave or walk guard beside the person navigating the unmapped roads -- to stand witness to the monsters -- theirs, mine, anything that takes shape out of the dark. We are so woefully out of touch with this side of the cycle that I decided to come out with my guardianship self! Here's to the treasures within!
miracles,
k-