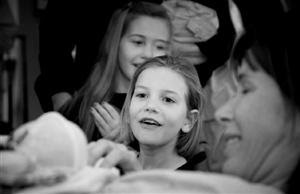 The Clark family
Photo by Miyo Strong
Today, Newsweek magazine featured the MISS Foundation in an article about memento mori photographing with the group Now I Lay Me Down To Sleep.  They interviewed me about my work with traumatic child death as well as one of my research studies on perinatal ritualization. It's a beautifully powerful and sensitive piece. It is the February 9, 2009 issue in case you'd like to pick up a copy.

In addition to the article citing my research, I was able to appear on the syndicated Newsweek radio show with reporter Claudia Kalb on February 1, 2009 (toward the end of the show). While much work remains, we've come a very long was from our distant and evasive past.

I'd personally like to thank Newsweek reporter, Claudia Kalb, for her interest in this important story and the apparent compassion and dignity she offered the families, and the magazine itself for this often-overlooked human interest story.

I thought it was a great article and was pleased to see it covered so well. Thanks for speaking for all of us babyloss mothers out here!

I read the article and thought it was really wonderful. It was a great way to get the word out about how stillbirths are not researched or focused on nearly enough. Thanks for sharing your voice yet again!

My wife and I just lost our first baby in his 39th week, and a friend gave us this article.
It has been a great help for my wife and me to know that we are not alone in this "vast and sudden sadness" (there are no better words to describe it)

Thanks for all the work and research you're doing on helping all the families such as ours that have had this experience.

This article came out a week before our baby girl was born without a heartbeat. My mother read it on a whim and gave it to me after our daughter died. Such ironic timing. Thank you for your blog, you are putting into words all the things I can't.

I am so very sorry to you Mr Ramos and Ms Ashley as newly bereaved parents. The heartbreak is overwhelming...