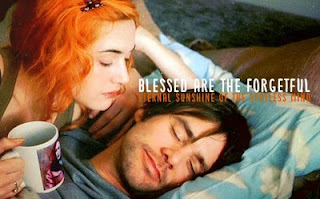 Clementine: Joely? What if you stay this time?
Joel: I walked out the door. There's no memory left.
Clementine: Come back and make up a goodbye at least,
let's pretend we had one... Goodbye, Joel.
Joel: ...I love you...
Clementine: ...Meet me in Montauk...
Eternal Sunshine of the Spotless Mind was released in 2004, and I knew immediately I had to see this movie, if not because of the idiosyncratic storyline, then for the one-and-only quirky Carrey's performance.  I've never been much of a futurism genre connoisseur, but I loved this thought-experiment-of-a-movie. It was unlike any other I'd seen; an unusual type of humanistic sci-fi that provoked existential questions about love and loss, joy and suffering, life and death.  Yet, as neuroengineers and researchers uncover more about the mysteries of the brain, and more specifically memory storage, retrieval, and functioning, the possibility of selective erasure becomes more than some far-fetched fantasy. In fact, it may be that this option will become one of the great ethical concerns of 21st Century modern medicine. Some scientists certainly believe so.
Naturally, as I pondered those possibilities, I had to ask myself:  Would I erase the memory of my beloved child if it meant I would not have to feel the pain of losing her? (I hear an ol' Garth Brooks song lurking around the corner...).  It only took me seconds, perhaps nano, to emphatically answer no. I would not.  Even amidst the pain and angst and despair, the gifts of her presence in my life- the love- make it all worthwhile.
But what about qualitatively (subjectively) less painful experiences, such as relationship losses? Would I erase those memories if I could?  What lessons would be lessened?  What experiences would I have missed due to fear of and anxiety over my own emotions?  Certainly, during acute moments of sadness or grief, I may have wished for the path of ease - a short cut, circumvention around the pain - if the option had arisen. Or would I, given what I know now- and understand- about the importance of suffering as a means to wisdom and fulfillment and meaning? And had I not known the pain, what would have become of the compassion and empathy for others which I have developed through my own suffering?
Elie Wiesel said that 'whosoever survives the test, whatever it may be, must tell his story....that is his duty.'  Within that duty, implicitly, is the necessity to help others who also fall into the darkness of the human experience.  If no memory remained of our sufferings, how would we tell our story? Would our story really be our story at all?
What would you do? If you could engage in selective erasure, would you?

I know you never asked to be, never strived to be, but you are my hero.

Your words never fail to strike my core, and lift me. Thank you.

No, I would not erase my memory of Liam. He is my love, my inspiration and huge part of who I am today. Liam is my son, much more than just sorrow and grief. Just thinking of erasing his memory causes me pain. He has taught me lessons of living that I treasure. He is a gift to protect and share, not erase. I love him and will carry the burden of grief to know his story is safe in my heart.

That is a wonderful movie - I watched it a year or so after it's release on video. It would have deeper meaning to me now I'm sure.

Thank you as always for your writing and thoughts.

And definitely I'd never change the memory of the moments spent with my son for anything.

Also, I think that these moments of pain and sadness allow you to discover things about yourself that you never knew you had in you; as well as the personal growth that they make you have.

I wouldn't erase a thing. I would have wanted to early, when I was reeling from pain, but my body and mind did the work using love to weave the suffering and pain of losing my daughter with the joy and beauty of the gift of motherhood she gave me--and that is my life. Erasing a single memory of Caitlin, would erase an essential truth of my life.

Natalie-
What an honor for me. Thank you so much. Thank you.

Amy-
I love how you say you "protect" his gifts...with a mother's fierce love, I'm certain. Thank you for your comment.

Indeed, Carlos. The growth is painful and agonizing and beautiful and meaningful all at once. It's amazing how those states can be juxtaposed so powerfully into our identities.

CaitsMom
You said it would "would erase an essential truth of my life."

Truth. This really resonated with me. Thank you.

Absolutely not. I proudly (albeit kicking and screaming sometimes) bear the weight of this grief for the love of my precious son. Without having experienced his life and death -- and the aftermath in me -- I would be but a shell of who I am today.

Now, if I could erase some of the other pains in my life.... well, that is tempting for certain.