Parasitism: Inflammatory rhetoric of the ignorant 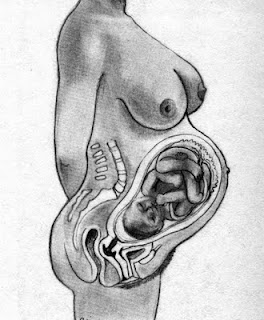 But if thought corrupts language, language can also corrupt thought.
Political language. . . is designed to make lies sound truthful and murder respectable,
and to give an appearance of solidity to pure wind.
George Orwell
Recently, I've engaged in lively debate with a person who asserted that unborn babies - fetuses (Latin- foetus- meaning offspring) - were nothing more than parasitic organisms. I found this to be curiously inaccurate for an intellectual to wantonly assert as well as inflammatory and offensive.
Now,this person is a fellow academic. Not an ignorant person. Or so I thought.
I'm not a professor of parasitology or biology, so I decided to challenge her assertion.
So I went to an expert- Dr. H.D. Crofton- Parasitologist and author of the academic text Parasitology to define the criterion for a "parasite". According to Crofton, each of the following criteria must be met in order for an organism to be classified a parasite:
1. A parasitic relationship is an ecological relationship between two different organisms/species, one designated the parasite, the other the host.
2. The parasite is physiologically or metabolically dependent upon its host.
3. Heavily infected hosts will be killed by their parasites or harm will be done to the host.
4. The reproductive potential of the parasite exceeds that of their hosts.
5. There is an overdispersed frequency distribution of parasites within the host population. That is, the parasite population is not evenly distributed amongst the host population nor is it randomly distributed but clumped, so some hosts have a lot of parasites, most have very few.
(Crofton, H. D. Parasitology 63, 179–193 )
So, frankly, this person with whom I was debating was vagariously using imprecise terminology.
This type of ideological recklessness occurs in academics when scientists do not sufficiently explore terminology...their vernacular is often influenced by suppositions. And suppositions without sufficient evidence are often incited by the sociopolitical context wherein rhetoric is not challenged; rather, it is passively accepted by the majority as absolute in order to satiate an agenda.
In other words, unborn babies are referred to in certain arenas as "parasites" for political reasons. But it's an demagogic- and plain instigative- assertion.
But wait- there is so much more in defense of unborn babies.
And it's beautiful.
Seminal research on fetal microchimerism suggest that when a woman has a baby, she receives, in exchange for her sacrifice, a gift of cells that remain behind and protect her for the rest of her life.
That's because a baby's cells linger in the mom's body and -- like stem cells -- may help to repair damage when she gets sick. It's such an enticing idea that even the scientists who came up with the idea worry that it may be too beautiful to be true. Diana Bianchi, Chief of Genetics at the New England Medical Center in Boston did some of the pioneering research that discovered that moms carry fetal cells in their blood for years and years.
In fact, "fetal cells that persist in a mother's body long after the pregnancy- even decades later- may reduce her risk of breast cancer," according to researchers at the University of Washington and Fred Hutchinson Cancer Research Center. Their findings are published in the journal Cancer Research.
Robert Krulwich, an NPR journalist spoke to many scientists who agree: He says, "It's not a far-fetched idea. These cells may behave like those famous embryonic cells: They can turn themselves into any cell mom needs. If she's got a bad heart, they can be healthy heart cells. Bad lungs? No problem, they can be lung cells. Fetal cells may be the ultimate repairmen (or repairwomen)."
*******
Wait, wait. This is big people. The cells of every baby I've had- my four living children- and my beloved dead child- are living now, inside me. And they may help to save my life one day. I carry my children in my heart, perhaps, both mythically and literally. Chey's cells live. Inside me. Now that is enough to bring a tear or three to my eyes. As I told Sam on FB, it's gleefully ironic when mother's intuition synchronizes with science, and when the wisdom of the ancients eclipses the jaundice of modern thinking.
Every mother who has lost a child has within her cells that belonged to that son or daughter.
******
So, the relationship between a mother and her unborn baby is most accurately portrayed by the concept of mutualism or symbiosis. Each benefits the other in some very profound and perduring ways.
Thus, there are many scientific facts that should compel intelligent people to cease referring to unborn babies as parasites. Let's begin with the fact that it's indiscriminate and manipulative and ignorant, and reflects poorly on the cognitive capacity of the individual making such erroneous claims.
But, there are even better reasons to stop referring to unborn babies as parasites. It is hate language intended to devalue a woman's baby. And the devaluing of her baby is a devaluing of her self.
It's offensive to women- to mothers- to the babies- and to all those who really love them.
(Another link to Bianchi's research)

Truly fascinating! The research on the symbiotic relationship between mother and child brings up so much emotion… I'm nearly speechless. For years now, I have wondered why I became suddenly so much healthier, physically, after Liam died. Previous to having Liam, I had been getting colds and experiencing other weird health problems, regularly. I've speculated on reasons for why I became healthier, rather than sicker, which is what would seem to make more sense in the midst of the incredibly stressful early days of grief. The only reason I've thought of that has ever really made sense to me is that it was my body's natural ability to protect and care for itself (which may not be all that far fetched). But this, the idea presented in this beautiful research, this is something that never crossed my mind!

And I have always admired your ability, Joanne, to so intelligently stand, steadfast, against ignorance! Thank you.

That thought brought tears to my eyes as well.

the so called intellectual is plagued with her own parasite its called the "ignoramous" parasite which has the effect of paralysing normal brain function and leads the host carrier to be completely ignorant to what it truly means to lose a baby...
I really like the thought that Harry's cells are with me...great post..

Thank you for standing up for our babies. The fact that anyone could be so abrasive as to call a child we have carried in our womb and love a parasite is astounding to me. I love that we carry a piece of our children with us. It makes me feel closer to my girls, Sophia & Ellie, who left us too soon.

Thanks for sharing your knowledge with us... I am even thankful to the idiot that called babies parasites. He made you share.

First, oh my gosh this is incredible! And it brings tears for sure! Second, your blog is amazing looking and by the way, that background song is awesome too!

Wow, Joanne. This takes my breath away. I have part of Sage within me; I continue to carry him, and he heals and nurtures me. It is beautiful to think of this with a living child. To think of it with a child who has passed away is really profound.

After reading your blog, I did find myself wondering about the context of that person's comment and what the intention was. It just seems puzzling that someone would say that ... and to YOU!

Thank you for writing.
Jessie

Thank you all for reading... evocative.

This is amazing. So beautiful.
It brought tears to my eyes. Thank you for your diligence and determination on behalf of others.

Wow, that person was really, really reaching. How exactly did this come up? Was she defending abortion? I'm trying to wrap my mind around the idea that a human can consider a developing human a parasite.

Yes, Judge Sixkiller- it was in the context of a discussion about reproductive rights...