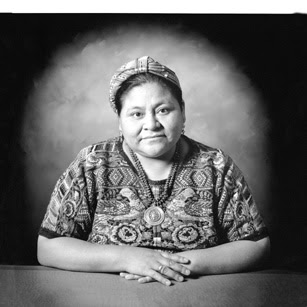 To be a light to others you will need a good dose of the spiritual life. Because as my mother used to say, if you are in a good place, then you can help others; but if you're not well, then go look for somebody who is in a good place who can help you.

Grief is a universal experience that transcends ethnicity, region, and language, weaving all human beings together in a common experience. Yet, I cannot begin to imagine the magnitude of grief experienced by an oppressive, immoral, or criminal government. Nor can I imagine life under the rule of an government that legitimizes the torture of children. Rape and murder. The theft of land, homes, subsistence, and dignity.
Rigoberta Menchu lived this grief daily at the hands of her oppressors. Yet, courageously, Menchu says of her experience, “This is how I came to consciousness.”

Her book, “I, Rigoberta Menchu” confronts the brute ugliness of colonization without aestheticizing reality. Ordinary people would have been defeated by the relentless anguish. Ordinary people would have remained the passive audience of the Imperialist’s stage. But Menchu is anything but ordinary. She possesses the indomitable spirit of resistance, seemingly fueled by the very assaults intended to silence her people, the indigenous Mayans. Menchu is a moral guerilla in a grievously, immoral fight.

Menchu considers herself a deeply spiritual woman, called to action by her ancestors and motivated to fight in memory of those she loved and lost while trying to preserve the Mayan culture. She fights, not only for the lives of her people, but for the survival of a culture she loves. Witnessing Menchu’s transformation from paralyzing grief to fortitude awed me. Yet, Menchu’s resolve is congruent with the horror she experienced. The slaughter of her family is Menchu’s ammunition, and she remains determined to speak for her brothers and sisters, mothers and fathers, children and elders who were unjustly silenced. She is a true warrior.

While her story is reminiscent of a historic figure worthy of glory, each and every day I witness bereaved parents as heroes for their causes, using their voices to fight policy, to advocate, and to ensure social justice. These, too, are warrior heroes, though, perhaps unsung, who are in that "good place" to help others.

And this, I believe with all my heart, is how we come to consciousness.