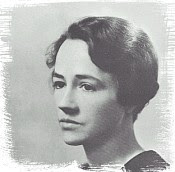 "When you find a person who has the same thought as yours, you cry out for joy, and you go and shake him by the hand. Your heart leaps as though you were walking in a street in a foreign land and you heard your own language spoken, or your name in a room full of strangers."
-Anne Morrow Lindbergh
On March 1 of 1932, Charles Lindbergh, Jr., aged 20 months, was abducted from his home in the middle of the night. Most of us have heard the horrific story of this kidnapping and murder. Anne Morrow Lindbergh, his mother, went on to publish a number of books, making significant literary contributions. My two favorites- A Gift from the Sea and Hour of Gold, hold within their pages exquisite truths, some rarely spoken with such eloquence:

Contrary to the general assumption, the first days of grief are not the worst. The immediate reaction is usually shock and numbing disbelief. One has undergone an amputation. After shock comes acute early grief which is a kind of "condensed presence" -- almost a form of possession. One still feels the lost limb down to the nerve endings. It is as if the intensity of grief fused the distance between you and the dead. Or perhaps, in reality, part of one dies. Like Orpheus, one tries to follow the dead on the beginning of their journey. But one cannot, like Orpheus, go all the way, and after a long journey one comes back. If one is lucky, one is reborn. Some people die and are reborn many times in their lives. For others the ground is too barren and the time too short for rebirth. Part of the process is the growth of a new relationship with the dead, that "véritable ami mort*" Saint-Exupéry speaks of. Like all gestation, it is a slow dark wordless process. While it is taking place one is painfully vulnerable. One must guard and protect the new life growing within-- like a child.

One must grieve, and one must go through periods of numbness that are harder to bear than grief. One must refuse the easy escapes offered by habit and human tradition. The first and most common offerings of family and friends are always distractions ("Take her out", "Get her away" , "Change the scene", "Bring in people to cheer her up", "Don't let her sit and mourn" "I will instruct my sorrows to be proud," Constance cries in a magnificent speech in Shakespeare's King John. Despite her words, there is not aristocracy of grief. Grief is a great leveler. There is no highroad out.

Courage is a first step, but simply to bear the blow bravely is not enough. Stoicism is courageous, but it is only a halfway house on the long road. It is a shield, permissible for a short time only. In the end, one has to discard shields and remain open and vulnerable. Otherwise, scar tissue will seal off the wound and no growth will follow. To grow, to be reborn, one must remain vulnerable-- open to love but also hideously open to the possibility of more suffering.

And how is it that 78 years ago, a bereaved mother in 1932 could have spoken truths that resonated so with me today, her thoughts the same as mine? Lindbergh speaks my name. She speaks my name in rooms full of strangers. And grief, of course, remains the same: It is, certainly, the great leveler.

This is amazing. Thank you so much for sharing.
xo

THis is a powerful bit of writing, and something I needed to read. I have been struggling with constant challenges from Life lately. Not just the weight of grief, but daily difficulties that will not relent. There are times when I just want to give in, give up and stop pushing. But reading these words reminds me life is felt most when open and vulnerable. The pain will be followed by growth. I just have remind myself growth is what I want and not delcare defeat just yet.

Thank you for sharing. That is just amazing.

Thanks for reading everyone. I am glad it meant something 'big' to you too.