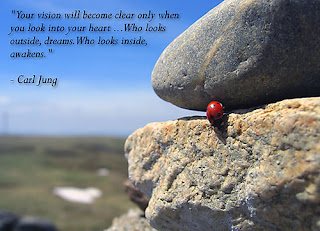 I awoke, quite suddenly, at 1:40 a.m. last night. I opened my eyes, slowly, disoriented by the chirping crickets that hadn't been part of my dream imagery moments earlier. I looked at the night sky through the window and reality smacked me on the still-foggy-head.
It was all just a dream.
I wanted to go back to sleep to re-enter the dream, but my emotions took over and I began to weep.
It's been 16 years and two months since Chey died. In all those nights I've laid my head to slumber, I've tried to will myself to dream of her countless times. So much, in fact, that I'd given up the ghost on that wish.
So in total, I've dreamed of her only three times in 194 months. Seems so odd to me. This person who has occupied so much of my heart and my soul and my body- this person who is such an integral part of my being in the world- to dream of her so rarely seems an injustice of my unconscious mind. To add to my quandary, the three dreams I had of her left me terribly distraught upon awakening. In the first, one week after her death in 1994, she was running through a field of white daisies. She wore a big white brimmed hat. She turned briefly to look at me, but I couldn't see her face, as she ran through the field. I pursued her, calling her name, begging her to come to me. But she just ran, and ran, and ran. The next two were similar dreams. Elusive and ephemeral. The most recent, about six months ago, I was in a big conference center. I heard someone call her name amongst the sea of people and I saw the top of her head in the crowd. I pushed and pushed to get to her, frantically calling her name. "Cheyenne, Cheyenne, please, please, wait," I cried to her desperately. The emotional urgency, even now, remains evocative.
One night, in 2006, I dreamed of my dead father. It was such a powerful dream that I awoke saying sternly in my own head, "You are seriously not going to try to convince yourself that was just a dream, Joanne."
I dreamed my father visited me. We both realized he was dead, and I kept saying, "Oh my gosh, Daddy, oh my gosh!" He said, "Joanne, I have something very important to tell you and I don't have much time. " But I kept interrupting him, "Daddy, daddy, oh my gosh" over and over and over in disbelief! Then, I said, "Daddy, are you with Chey? I have to know! Are you with her?" and his image began to fade in front of me. "Daddy, don't go, please don't go," I begged, sobbing out loud as I slept. He faded before either disclosure. I awoke crying and continued, intermittently, to weep all day. Again, frustratingly fleeting and intangible.
Freud believed that dreams were incited by nuggets of the unconscious mind: feelings, thoughts, images, beliefs, experiences. Jung believed similarly, and added that dreams make us whole, more integrated. More concrete researchers admit they don't really know why humans dream or what function they serve, other scientists believe dopamine (L-dopa) plays a role in dreaming. Across cultures, the spiritual or religious believe, often, that certain types of dreams may be God's way of communicating between worlds.
Last night, for some unknown reason and literally from out of nowhere, I had the mother of all dreams. I dreamed of all my dead. They were corporeal not conceptual, concrete not evasive, and indelibly present.
I saw Cheyenne. I touched her. I hugged her. I told her, repeatedly, how very sorry I was that I could not save her, that I had given her death instead of life. I wept. She wept. We held each other and she said, "Mom, I forgive you. It wasn't your fault." I wept more, and felt such overwhelming love between us that to try to speak of it here would be insufficient and vacuous.
The moment was too sacrosanct for language. I could feel her.
My father and my mother were there too. Elisabeth was there. My grandmother was there. All recognizably dead. But all integral in the dream, except my grandmother, a woman with whom I was never close, who appeared, briefly, back in my mother's room as a sort-of-disconnected-apparition who never made eye contact with me.
The night sky looked barely real this morning. I saw the bright stars against the darkness and the full moon lit the sky just enough that I could see dew glistening on the leaves. The crickets sang in full orchestra. For a few moments, I had trouble distinguishing the world of dreams from the world of reality.
I haven't accepted a particular theory of why we dream. This morning, it's inconsequential. I dreamed of her. Finally. After all this time, I dreamed of her and saw her face and touched her and held her and spoke the words I've waited so long to say. And for that, I am filled with tearful gratitude. Even if this dream never re-emerges, it has incited a looking-within my self today that I've never before experienced.
And I wonder if it was, in fact, just a dream, at all.
(Photo for M-bug)

Wow- that is a powerful dream. I'm so glad you were able to touch her, feel her....

I treasure those rare dreams where I can feel my mom or even rarer, Liam. Each time I hold onto the feeling until it sinks away into the fog of daylight.

Thank you for sharing this intimate dream with us.

Thank you for reading Amy... I'm hoping this feeling lasts, and holding on like you with your dreams of Liam.

I am in tears. This was so beautiful. Thinking of you and Chey always.

I have only had two dreams of Nora, one was right after she died. My grandmother was holding her saying she was okay. And the other.. not really a dream but I heard Nora calling for me, urgently .. I awoke but felt very disconnected from Nora. I have always wished to dream more, to hold her, to speak to her.. but that has not happened.

Wow, Christine. That entire sense of urgency is really disorienting isn't it? I don't know why this dream was so qualitatively different, but I am really glad I had it - I suppose it was time. I hope the same for you one day.

Mostly, I just want to say, HOLY SHIT! Over and over again.

Oh Jo! I am happy for you, envious of you, and relieved for you.

What an amazing experience!

Thank you so much for sharing this. I felt sincere joy for you as I read your words. Such a beautiful gift. Again, thank you for sharing your experience. As always, your words are poetic and touching. I actually smiled as I read of your dream, and I felt your joy.

And, I felt renewed hope as I read. Victoria's 14th birthday was Saturday. I have never met her in my dreams, and it's something I yearn for continuously. You waited 16 years for your special dream. I often wonder if I yearn for it less, will it happen sooner...as if I can trick the powers that be, the universe, or whoever and finally have my dream.

Jo, I read this earlier this morning, but I just read it again. SO powerful, Jo.. I am so very happy that you and Chey finally had this incredible moment together. That you were able to say to her what you've always longed to say.. to see her, hold her, cry with her..
Indeed, there are no words at ALL for everything that this experience IS for you. Katie said something so true- "relieved for you." The moment you described is so elevated from anything we ever "normally" feel in this earth plane - so many profound emotions, such soul-deep meaning!
What an absolute miracle, Jo. Surely one that will be with you for all of your days, until you are with Chey once more. So beautiful. Thank you for sharing this with all of us.

Thank you Joanne for sharing such a personal story about Cheyanne. I am so very happy for you. It brings me to tears. I am envious of the wonderful "dream" and the feelings that it left you with. I am also hopeful, that I, too, will someday have the same feelings with my little Braden. Thank you again for sharing Cheyanne once again with all of us. If anyone deserved such a special "gift" it is YOU.

(((((Joanne)))))
Thank you for sharing your amazing dream. I am so happy for you, that you were able to see her, hold her, feel her, tell her. I have dreamed of Theo only twice and one was very upsetting, the other I don't quite understand--I too spent many nights wishing and trying to will myself to dream of him, asking him to come to me in a dream. I stopped doing it. I just hope one day I will be lucky enough to have a similar experience. How beautiful--Thank you so much for sharing. What a powerful, beautiful experience. Some dreams are not "just" dreams.

Thank you everyone for your kindness, generosity, and for reading. I try to be as transparent as I can while still maintaining some degree of intimacy with her.

I appreciate all your sharings, and your children...

Wow. That is one of the most beautiful things I have ever read. What a gift for you to have received. I am reassured to know that I'm not the only one who longs to dream of my lost child, but doesn't. My precious son has visited me only once in a dream. I will keep hoping all my life to see him again.
Thank you so much for sharing.

What a wonderful dream. I have had one dream of Lillie Kay since she has died 9 months ago. But why I really wanted to write was the dream my mother had about my sister a couple months after she died 5 years ago. My mum had a dinner party for my late sister's friends shortly after she died so they could all remember and celebrate her life. A couple months later my mum had a dream about my sister. She said she was making her bed and she just appeared on it. My mum said she went to touch her and my sister said "No mom, you can't touch me. you can ask me questions, but you can't touch me." So my mum asked questions. She asked if she was present for the dinner party. My sister told her no and asked who was there. My mum told her all the friends and this girl name Becky was there as well. My sister interupted her in my mum's dream and said "Becky was there? That's surprising" and my mum couldn't remember why she said that. So she emailed another friend of my sister's named Lisa. Lisa said that she too was surprised Becky was there because she always canceled plans at the last minute. My mum would have no way of knowing that. I truly believe that was my sister speaking to my mum through her dream. What a blessing, Joanne, that you got to experience a similar dream about Cheyenne. Thank you for sharing that touching story. It made me cry. (((HUGS)))
-Kelly
Angel mommy from MISS

Gorgeous! And to say that to speak of the emotion would be vacuous and insufficient makes SO much sense. As always, thank you for sharing your journey with us. Peace.