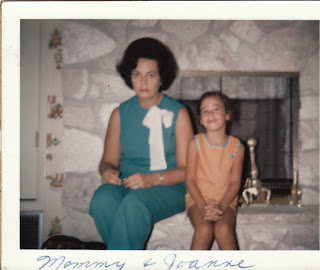 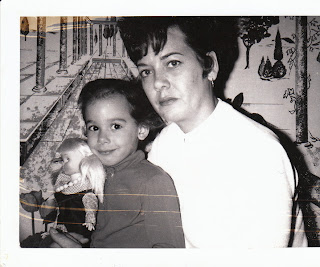 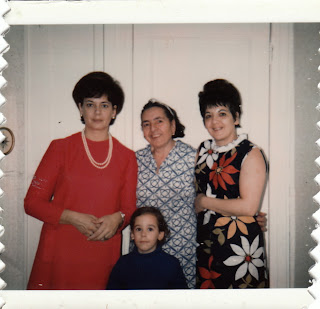 The past is never where you think you left it.
-Katherine Porter
I was born by accident. My brother, Mark, enjoyed the crown of the family baby for nine years. Then, a very annoying sister usurped his place in the family and life would never be the same. This was the family story I'd always known, for more than four decades of my life.
But family stories are, sometimes, revisioned. And those important conversations about painful truths are sometimes pieces of the elusive past, better unspoken to once-passed generations.
I had a dream about my mom and dad a few nights ago. They hadn't yet died in my dream. Rather, I knew death was impending, and I wanted to video tape them to capture more memories. I spent very little time on my mom, focusing the camera on my dad instead. In a moment of sustained eye contact, he looked at me and said, "I love you baby." The dream bothered me because there was so little focus on my mother. In all my dreams of her since her death many years ago, she's looking away from me, I cannot quite touch or reach her. She is unapproachable and fleeting...
During my most formative years, I felt much closer to my father, seeking his comfort when I was hurt or afraid or lonely. He was affectionate, warm, and nurturing. He called me "sweetheart" and "baby" frequently. He was my caregiver, my primary source of life and sustenance on this Earth. And, when not angered by my innate iconoclasm, I could see love in his eyes even though he was not particularly effusive.
My mother, on the other hand, was detached, distant, and phlegmatic. She achieved remuneration once my eldest son was born as she showered him- and the other children who would later follow- with unmitigated love, devotion, and affection. She was a model 'Nana' to the children and they adored her. And while I was overjoyed at the bountiful relationships she had with each of my children, it never made sense to me that so much felt lacking during my own childhood. And the container that held my little-child-heart was always saddened by a sublime pining for my wished-for-mother.
After my dream this week, I called my older sister, Eda. I told her about my dream. We both cried. She called my older brother, Johnny, and during the triune conversation, whilst repeating my dream again, he said, "You know mommy almost died once before you were born."
"What?" I said.
He repeated himself.
"What are you talking about, John?"
"Mommy lost a baby before you were born and she almost bled to death," he said.
My sister confirmed my mother's near-death experience.
"When? What happened?" I asked, nonplussed by his delinquent disclosure.
"Oh, I don't know what year. Hmmmm," he mustered. After some brief bantering about years, he said she had become pregnant about two years before I was born, some seven years after the original baby, Mark. "A boy," John said. She was in her second trimester when she began to bleed. "She was very sad, she took it very hard," John remembered in a solemn tone. "Do you remember that, Eda?" My sister affirmed. He went on to describe the family as "changed" after that. My father was very sad and expressed his sadness. My mother, on the other hand, withdrew and spoke to no one of the baby or her own nearly-lost-life. She had depressive symptoms, slept more than usual, and remained stoic and silent. Not even two years later, I was born.
I was both perplexed and speechless. My mother said, in passing once, that she'd had a miscarriage long ago but when I pried her more, she told me it was "no big deal" and refused to discuss it with me. She certainly didn't mention the prolonged hospital stay or that she'd nearly lost her own life or that she loved and wanted the baby so much that her grief was untouchable for her.
When I hung up the phone, I got out the pictures I'd kept of my mother and a little-girl-Joanne. They were the photos that always gnawed at my sense of self in the world. She was rarely touching me, rarely smiling, rarely looked happy. The photos were a testament to the emotional dysplasia I'd sensed during my early childhood and that remained in my implicit memory. I looked at her face carefully, mindfully. I really looked at her. And then, I saw her. My mother.
For a moment, the dead were resurrected to a place of truth, where her ghosts and mine gazed into one another intently. The past became the present. A mere glimpse was all I needed. And I understood, and I forgave.

Wow. I've heard of a situation like this before. Def testament of how lifechanging losing a child is.

What a heart-wrenching discovery, Joanne! ((hugs)) I wish it were different... how heartbreaking that she lived all those years in silent suffering.
Much love to you, my awesome friend. xo

so sad. Sad that she never got the help she needed (different times I am sure) and so sad for you. When I first looked at the pics, before reading, I just thought how sad she looked.

I am glad you found understanding.

and I can't believe, knowing your line of work, that your siblings never told you what they knew. that stoicism is such a learned handicap (coming from a recovering stoic)

Wow....very heartfelt story. It goes back to what I always say about people "everyone has a story to tell"...and boy did your mother. I can imagine that she did not want to get attached to you like she could have because she was numb after the miscarriage...or just numb because she didn't want to feel because it brought to much pain.

All I can say is wow...and amazing how the spirit world works in that you would find solace in helping others in this situation...a "service" that was not available for your mother....your little brother's spirit has given u that torch to carry for people like ur mom...

Wow. This is incredibly powerful.

Oh Joanne--Amazing, sad, touching. I can see that pain in your mother's face. And you are so very beautiful--what a beautiful little girl. Thank you for sharing.
XOXO

Oh, sweets. I had no idea this was some seed and part of what we were all talking about yesterday in the convo about what it means to see and not see.

And that your dreams have mirrored your mom's refusal to be seen fully or to see her own pain fully...just wow. And love you much. And wow.

Thank you for sharing your story Jo. Very powerful and moving. My grandmother's story was very similar and very sad. She never recovered , the sadness took her mind over.
That is one of the reasons I am so grateful to you and all you do. I almost took the wrong path, but thanks to you and MISS I was able to share, to cry , to remember. Thank you. Much love.

What an amazing story. Thank you for sharing this!

Thank-you for sharing this powerful and personal story. I have a simialr birth & near death story myself, and if I'm ever fortunate enough to have another child, I will try to keep in mind how the way I deal with what happened affects my family. As it does now.