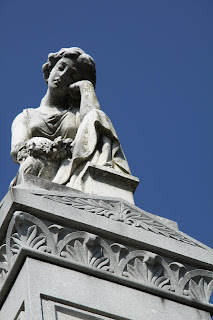 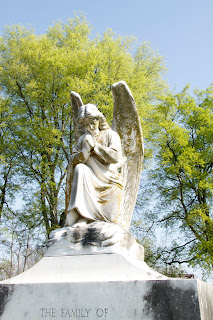 Photos are of the Elmwood Historic Cemetery, Memphis
______________________________
Only when we tarry do we touch the holy. -Rilke
I saw an old, dead-tree skeleton yesterday walking from Sedona to the Village that I've previously not noticed. He was magnificent, taller than the others, his bones exposed to the elements slowly decomposing into his soil as he cultivated new life around him. I wondered what he looked like when he was dressed in gently whipping leaves, visited by birds and other creatures. He reminded me of Jack and the Beanstalk, his narrowing peak indiscernible from the sky.
One of the things I noticed about my life is that when I take my time, I experience so much more, learn so much, and have more opportunities to really connect with others.
For example, when I walk, I am much more aware than when I bike. When I bike, I take in much more than when I drive. And there's hardly a comparison between driving and flying.
Sure, it's faster but...
On April 1st, I left for a lecture tour that would take me from Phoenix to Boston, and 17 states between, in less than 10 days. That's right. Ten days, driving across the country, 48 hours each direction.
You know, those 2 am stops at Flying Js and mini-marts and Circle Ks bring unlikely people together. Surprisingly, at least eight of my conversations, while paying for badly blanched cashews and Dasani, went something like this:
"Where ya headed today?
"Oh, I have lots of stops. Texas, Tennessee, Pennsylvania, Boston..."
"Vacation?"
"Not really," smiling.
Followed by cashier's inquisitive gaze.
"I'm teaching."
"Oh really? About what?"
I learned about the death of his niece to suicide last year. His sister "isn't doing well" and he was worried about her.
And another person in Charleston whose premature baby died 23 years ago. He still visits the cemetery on his birthday. And another in Lebanon whose wife died of cancer, and he took her home calling his farewell time a "gift". Still another in Valley Falls whose partner was killed in a car accident. He was thankful that the last thing they said to each other was "I love you."
And there were more, some of whom said they hadn't spoken to anyone about their grief.
One became tearful. So did I.
Lives lost, stories untold became lives remembered and stories heard, even if for a moment. And I was thankful that I tarried.

You were there, at those places, at those specific times for a reason. You were that someone who was meant to hear their grief, that was unspoken for so long. It makes me wonder why we have to keep it a secret, a painful secret. Thank you for everything you do to let us be heard. You give us a place, you give us a voice. Thank you, thank you.

Paula,
Thank you so much for reading and for your kind words. We, in this awareness of death, have learned that we all affect others, and our losses potentially bring us to a place of boundless compassion for others.

How wonderful! It makes me teary just reading about it~