Emery, Frances, and the Little Wounding 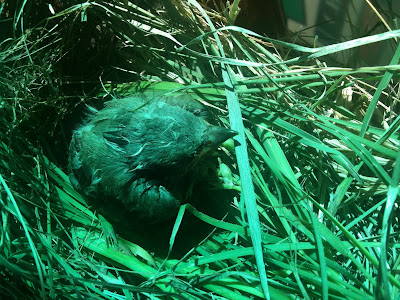 Emery. The baby bird rescued from the Colony, in a nest I constructed from dry grasses.
Two other fledglings died but he's going to make it!

Today, I nearly took off my toe: Call it an inexperienced, over-zealous tree trimmer gone wild. I should probably have had a stitch or three, but the idea of an emergency room visit on a weekend is powerful demotivation.

You see, I needed to clean the side yard because we saved a very-grateful, very-frightened puppy from certain death on the highway in Grants, New Mexico. He has a happy new home in Sedona, and he's named Frances after Giovanni Francesco di Bernadone aka Frances of Assisi. His rescue, of course, came on the heels of saving Emery, the baby King bird (I am happy to report that Emery is doing well and is safe in a wildlife bird rescue in Denver, also see photo above). 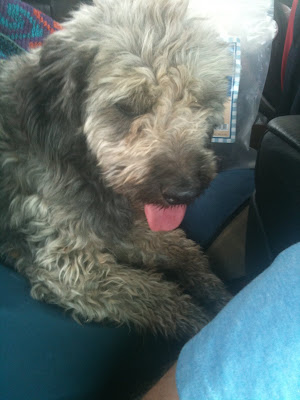 Maybe the luckiest dog in the world.
He'd been hit by a car, had a broken tail,
had a rope around his neck six times,
and was covered with exrement and detritus.
He was dehydrated and very hungry.

I digress. The dog run on the side yard was overgrown with tree branches and needed attention. Note to self: Hire a professional next time.

During the process of the near dismemberment, I realized the stark similarity between physical and emotional wounding. Please pardon the imagery as I tell of my experience:

I felt some pressure on my toe, but didn't realize how badly I was injured.

I looked down and saw flesh hanging from my toe. I actually kept trimming the tree for about 15 seconds thinking, "Oh it's no big deal. This hardly even hurts."

With astonishing dispassion, I called for aid, not for me, but, for Frances who would be alone in the yard when I went inside to disillusioningly attempt to fix my own toe.

Aid arrived and my gaping wound became the centerpiece of the discussion. I reiterated: "I'm fine, it hardly hurts."

Within ten minutes, my sympathetic nervous system via the endocrine system released glucocorticoids, norepinephrine, adrenaline, GH, and other helpful nasties into my blood stream. I was faint, felt nauseous, and dizzy. But still, no pain.

I desperately needed aid as my brain felt increasingly scrambled and I lost the sense of space and time. I kept insisting I didn't need aid despite my helpless predicament. 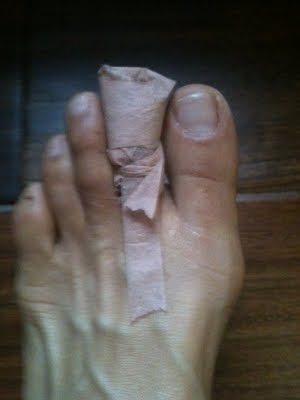 All leading to the little toe wounding...

Some insistent, nurturing intervention from caring others put me horizontal on the couch with my foot elevated to slow the bleeding. My clothes were sweat-drenched, respiration was Indy-speed, and my heart was beating furiously. I tried my best to breathe mindfully and slowly to counter the physiological reaction. A cool cloth to my head, kind others, and all the time I needed to reground myself helped me establish chemical homeostasis.

Then, and only then, the shattering pain lambasted me.

The pain radiated from every nerve cell in my foot, up my leg and into my thigh. Ah, but I could think clearly and I felt more in control once the stress hormones began to diminish from this non-life-threatening injury. The pain was literally paralyzing. I could not move. I could not think about anything but the pain. I don't remember much about that hour on the couch other than the pain.

I'm much better now, bandaged and mostly pain-free. Though life is different today, and will be tomorrow, and probably for the next week.

The things that were once so effortless and manageable now present significant challenge. Walking, for example... my gait has changed, so I'm much slower getting from one place to the next. I'm protective of my injury, aware of its constant presence. I have to change my shoewear and tend to my injuries this week. And of course, there will be a lifelong scar to remind me...

Toe amputation is nothing compared to losing a beloved one to Death. I'd have given all ten toes - and fingers - to save her life. And while physical wounds are quick to heal, the emotional ones are enduring, visible to us, often invisible to others.

So, today I learned that the process of wounding has a cadence. And if I pay close attention, living mindfully in every moment of my life, I grow wiser from those little woundings.

These little woundings teach us about the big woundings. And to understand, just a morsel, our true self in the midst of the wounding is a bittersweet gift.

One I wish no one ever needed to learn.

Its nice to see these rescued wonderful animals. My husband and I; against the advice of the vet even rescued a bat once. Pain is something I think about all the time, enough to make me go insane because of Jack's ordeal. Noone seems to understand because they didnt see what I saw and couldnt handle it if they saw the pics. The nurses had logged everything with pics and used our camera due to their ICU camera malfunction. Their were only two nurses left by the end that could handle his case and after they both took leave and one had a nervous breakdown. Even my husband had to step out when bandages came off or things got to ruff. Jack's pain is a burden I carry alone. Ugh okay not what I intended to go on about. Hope you feel better. Well wishes

Jo, I'm so sorry about your toe. Your account of it resonates with me, it's pain of a different kind. I hope that you are better now.

Michelle, I'm so sorry about your Jack. I went to your blog, such a sweet sweet boy. You are in my thoughts.

I am so sorry for your pain...from your toe accident...yes, I find that these smaller sources of pain teach me about the big pain.

Bill and I lived in the Wisconsin woods on 67 acres for many years...we rescued many animals. There was the rabbit we named Milton Burrow; the northern (bird) we named Little Mo who went on vacation with us because we were leaving when we rescued him..sadly he died on day 3 in spite of our efforts; and there were many more including our first Golden puppy who someone tossed into the local dump to die. He was our teacher for 14 years. We need to treat animals the way we treat those we love. Thanks again for this post.

Bill's heart is as beautiful as yours isn't it? Thank you for sharing this. The world surely misses him... with you.

And to the quote above I will add: and the pain is from the healing.

It's ironic that a terrible injury can lead to the telling of a beautiful, soothing story. I'm sorry for the loss of your loved one but glad you had and have love in your heart and the urge to share your thoughts.