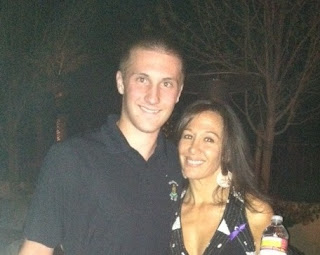 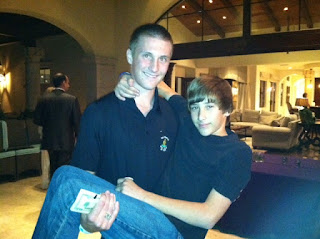 Connor and his little brother, Kyle
who offered the money they were paid for the night as a donation to our cause
The heart knows neither duality nor the limitations of time and space.
-Sri Sathya Sai Baba
Last night I spoke at the MISS Foundation's fundraiser 'An Evening of Kindness' to celebrate the more than 1,000,000 Kindness Projects which have been done (literally) around the world since the project's inception in 1997.
The event was held at the Merrill Estate in the generous spirit of Bruce and Janis Merrill, and with the aid of many amazing volunteers to whom I am eternally grateful.
Valley business leaders, philanthropists, and those touched by the work of the MISS Foundation attended. Ambassadors Maya and Woody Thompson came in memory of their beloved, gorgeous little boy, Ronan Sean who died in May of this year as a result of neuroblastoma. Leroy was there remembering Jason. Shawn and Theo were there remembering Zach. Melissa was there to honor Tyler. Michele was there to talk about International Kindness Project Day on July 27th and to remember Branden and to thank the compassionate folks at Circle K for helping Michele "be his mom for a day." Kathy was there to remember Lizzy. Mark and Sandie brought photos of Zach and Katie to share their love and their lives. And many, many more... Kathy Sandler's two children, who also worked the event, donated their money back to the foundation. Even the guitarist, hired from Flagstaff, decided to donate his time after the event in memory of his beautiful sister, Mandy.
To say there were many emotional moments and much, much suffering in the room would be an understatement.
Simply, there is no material place on Earth which can hold the anguish in that room last night. No matter how many beautiful kindnesses are born from the pain of this loss, the means never justifies the end. Ever. Still, exploring the beauty from pain is a choice we get to make, when we are ready, as bereaved.
I want to share one magical interaction I had with a young man, Connor, who reminds us that we have much to learn about time and space and age and wisdom. Our greatest teachers are, often, the youngest...
After all the speakers presented, Connor approached me. He had been volunteering all night, and I'd noticed his warm smile and quiet demeanor. He thanked me for our work, and he said that he nearly cried while I was speaking. He looked into my eyes and I could see and feel his compassion. Those moments are all too rare in this chaotic, no-time-to-pause-for-the-pain world. Yet, standing before me was a very young man who had given pause to my words and clearly felt them deep inside his heart. He said that he wanted to donate his earnings for the evening to help the MISS Foundation. He believed in our cause. My eyes started welling with tears. His did too. We just stood there looking at each other for a moment... this young man, a stranger, who opened his heart so far and wide, with such breadth and depth that time literally stood still. It's a rare thing in this world. I knew I was standing in the presence of a giant, and I was humbled.
As he promised, at the end of the evening, Connor approached me to hand me his earnings. So did his wonderful younger brother. They wanted to give. They weren't afraid of us like others often are. They did not recoil at the talk of child death. In the only way they could help, they wanted to help.
There were so many, many more magical moments last night. People who came to me and shared their sorrows and their losses and their sufferings. Those are the things which remind us of our humanity, of our shared connections to one another and to the bigger picture. I'm reminded of Trungpa Rinpoche's admonition to "hold the sorrows of the world in our hearts while still remembering the great Eastern Sun."
Connor and I exchanged numbers as he is off to college next year. He promised to stay in touch and offered to volunteer again until graduation next May. I want to express my gratitude and respect to his parents and his grandparents and his aunts and uncles and other family members who helped to raise him (and his brother) and who must have a surplus of generational loving compassion, as it obviously spills over his own heart and into the hearts of others.
And if those magical moments were not enough, in a Jungian twist of synchronicity, I discovered that Connor was born on the day we buried Cheyenne in 1994, and I wept. I imagine she'd have liked him very, very much too...

Beautiful words... I cried while reading you post. I lost my baby boy in 2008. As I was walking in the street and crying over my lost, a little boy that was with his parents came running to me a hugged my legs. I cried from happiness and sorrow, I knew my baby was trying to comfort me.