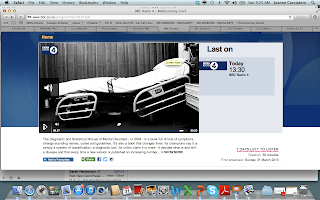 I'd like to share a fascinating and critical documentary from the BBC, Medicalising Grief, available to hear online only the next 7 days here

A thought provoking and honest discussion of grief, depression, and the DSM-5 featuring Drs. Jerome Wakefield of NYU, Allen Frances of Duke (emeritus), Gary Greenberg, psychotherapist, Lisa Cosgrove of Harvard, Trish Hill of University of Nebraska-Lincoln, Joanne Cacciatore of Arizona State University, Dana Merkling of MISS Foundation. On a personal note, this comes in the midst of a very painful, traumatic loss of my own.  I was unaware this would be aired today, so I dedicate my own participation in this documentary to the memory of my friend "T" and her grieving children.

I would highly recommend this program for consumers and clinicians alike.  Our gratitude to Matthew Hill, Gemma Newby, and the BBC for their courage in shedding light on this very important topic.

"The Diagnostic and Statistical Manual of Mental Disorders - or DSM - is a book full of lists of symptoms, strange sounding names, codes and guidelines. It's also a book that changes lives. Its champions say it is simply a system of classification, a diagnostic tool. Its critics claim it is more - it decides what is and isn't a disease and that every time a new version is published an increasing number of people are labelled mentally ill.

And for every diagnosis in the DSM, there is a corresponding medical treatment waiting in the wings.
In May 2013, the American Psychiatric Association will publish the latest edition of their DSM and it is likely to cause tension within the American psychiatric establishment.

But why is this medical-looking manual causing such controversy?

Where some say the previous DSM was responsible for pathologising childhood, critics of the new edition will medicalise grief.

Are the intense feelings most people experience after the death of a loved one misery or melancholia? That is the ongoing debate, the result of which will have an impact on millions of people and our understanding of a fundamental human reaction.

In a post-Prozac world, when normal becomes abnormal, medication generally follows. An estimated 8 to 10 million people lose a loved one every year and something like a third to a half of them suffer depressive symptoms for up to a month afterward. How much does the pharmaceutical industry stand to benefit if an extra 5 million people a year are prescribed anti-depressants?

Matthew Hill investigates the DSM, its decisions over what is and is not a mental illness, and the people behind it."

Thank you, I have posted this in a couple of my communities for bereaved parents.

Joanne, thank you, in the midst of your deep grief (a grief so related to the contents of this audio) for posting this. It sort of tied the entire argument up into a 30 minute program. I know you know so very well and so sadly the damage drugs like this can do and I reach out to you with deep compassion in your loss.

As you know I am a therapist with 40 years experience. I have, of course, worked with grieving people from time to time during those years. I also lost my beloved husband, a man who was/is a part of my very soul, 3 years ago last Wednesday. I thought I understood grief when Bill died... after all...I am a therapist. I guarantee you, I have not ever known the kind of pain I experienced and still do on and off as when he died or even the anticipatory grief during care giving years as I watched a brilliant and sensitive clinical psychologist, soulmate, deteriorate with Alzheimer's disease. I was in a whole new world. I am sure if I had chosen to see most MDs especially psychiatrists, I would have come home with a Rx for antidepressants and more because I had almost every symptom listed in the DSM for depression. My pain lasted for months, not 2 weeks, not 2 months. I am still, 3 years later, grieving and will grieve forever. So instead of going to see an MD, I started reading, educating myself, joined two grief groups (one just 5 weeks for spousal loss offered by a local Wisconsin based Hospice-the other a Hospice sponsored on line group that I still belong to). Over time and with great commitment on my part, in the midst of my deep pain, I learned that I was dealing basically with normal grief...yes complicated to some degree by total exhaustion from care giving and from trauma some of which was thanks to the poor end of life care at a hospital where Bill was for a while not long before he died. But I trusted myself enough and was surrounded by non-judgmental and caring people in my groups who supported me and still do. People who really understood grief and who cared deeply. If I, after all my experience, needed all of this input to know I did not need medications, what about consumers who do not have that background?

I could not catch the names of some of the speakers who were saying outrageous things but one of them said (I am paraphrasing) normal grief does not include insomnia, lack of concentration, suicidal thoughts and more. I am here to tell you that he is just plain wrong.

We all walk with grief that in this death phobic society is not acknowledged...grief over so much including but not limited to the loss of loved ones. The answer is not in a bottle of pills for the vast vast majority of grieving people. In fact, if we could get beyond society's death phobia, grieving people would not feel so alone in their losses. Surely there are situations of very complicated grief where it might be necessary to consider a medical approach but frankly I am so distrusting of psychotropic medications at this point in my clinical career that I would have to think long and hard before suggesting a client look to prescriptions. It is a huge dilemma for those grieving folks who might need some assistance from the medical world.

Sorry this got so long but I am just so frustrated with this entire DSM V panel, APA, and the pharmaceutical companies.
Mary Friedel-Hunt MA LCSW

Thank you so much for bringing this to my attention Joanne. As someone who has watched the debates over the release of the new DSM I will listen with great interest.

Thank you for posting this. I found this on YouTube since the link didn't work anymore. We are talking about this very topic in my graduate school class. I am now armed with information :)

I am thinking of you as you grieve for your friend. How tragic.