So, my little retreat center opened in Sedona officially with a grief-zazen day this past Saturday. Beautifully broken grieving people of all ages filled the room from early 20s and older who lost their Beloveds very recently and some years ago.

First, we lit a candle in honor of all our precious ones gone too soon.

Then, we sat in the stillness, meditating, praying, and holding space for grief.

The first sit was about 25 minutes long, and we opened with some Rilke. We paused between sits to weep, to listen, to share, to invoke poetry and prose:

We sat together in and out of meditation for hours. And, the hearts, oh the broken shattered pieces of hearts, the tears shed in the room... truly sacred ground.

And then, something truly amazing happened. As we ended, each person spoke the Beloved's name to the sound of the bell, and a young man, Evan, big brother to beautiful Blake who died at 19 of cancer, approached Lisa, mother of beautiful Michael Angelo, who died at age 12 in 2000 and Michael who just died this year at age 19.  He told her that, as she spoke Michael Angelo's name, he recognized his name... then he suddenly remembered a note one of his friends posted on Facebook a few months earlier. This was the post: 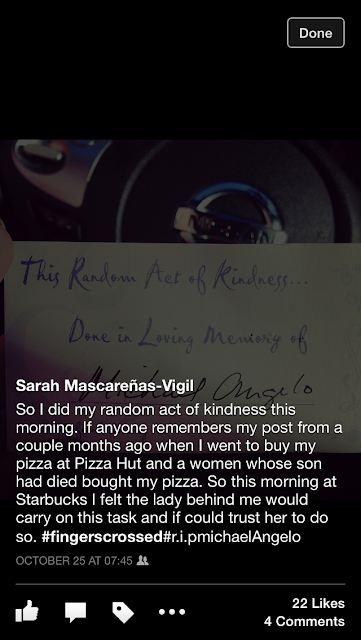 Yes. Evan's friend was the recipient of a Kindness Project committed by Michael & Anthony's mom in Phoenix, Arizona, a city of millions. And these families- as strangers- were now meeting in the same room, together, touched by compassion of three young men who died far too soon.  The Kindness Project (here) - which I officially started in early 1996 - had brought two strangers together in a way I could never have imagined.  We were all stunned.

And not only that, but Sarah, the recipient who posted the kindness committed to her, paid it forward, so Michael Angelo's love kept going and going in the world.

This is my tribe. It's a sad, brokenhearted, despairing tribe.  And I believe, as Rabbi Mendel of Kotzk said, "there is nothing more whole than a broken heart."


I offer pause and deep bows to these Beloved ones, gone far too soon:

Amazing, deeply moving... Love is the force between humans, no matter where we are, no matter if we are alive or dead...