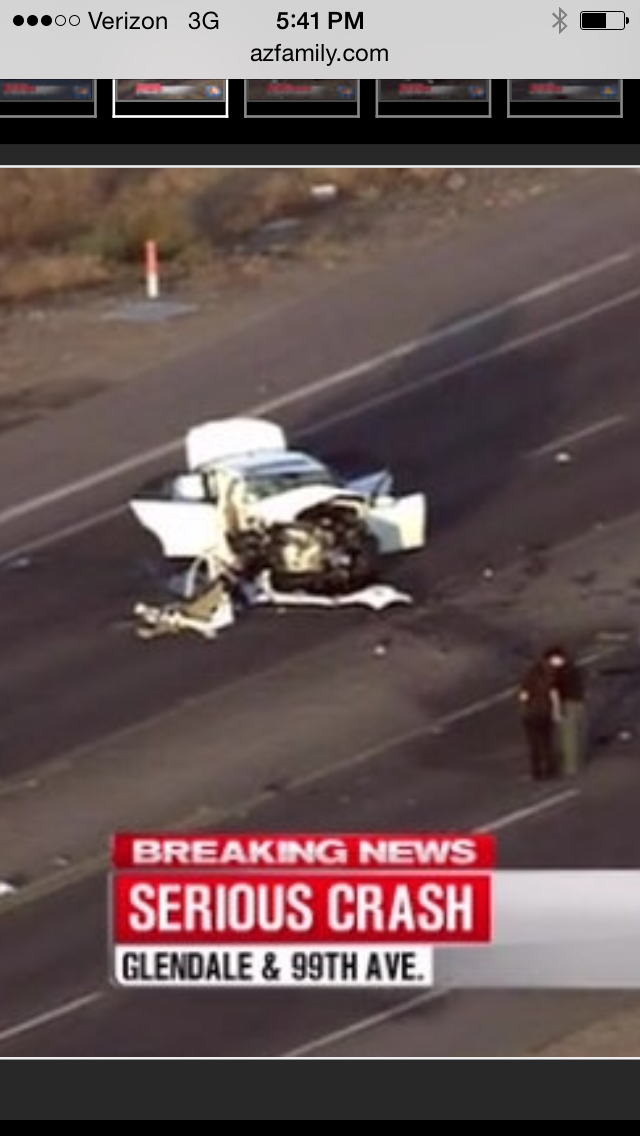 The afternoon knows what the morning never expected.
Swedish proverb

I am typing this from the acute surgical floor of a local Phoenix hospital where no mother would want to spend Mothers Day.  But I've been living at this hospital since Tuesday now, starting in the Trauma Intensive Care Unit, by the bedside of my beautiful son.  And I am quite grateful to be here by his side, after five sleepless nights, where he and three friends survived a horrific head-on collision with
a drunk driver on Cinco de Mayo.

Why? Because not all children with internal and traumatic brain injuries make it out of the ICU.  But mine did. Here is a small portion... The rest will come at a later date of more lucidity.

I received a text as I was driving on the freeway Tuesday at 1:00 pm.  I glanced down and saw "emergency" and called my other son.  Given the work I do, I take the word "emergency" seriously.

This news came less than an hour after one of the top mornings of my life: I had just left a meeting with the dean informing me of my academic tenure and promotion at ASU.

My mind spun.  I was driving on the freeway, north, and had to find an exit ramp to turn around and
get back to Phoenix.  That's the last thing I remember, other than two other phone calls I made, one of which was to the hospital.  Next thing I remember, I was at the foot of his bed, shaking, looking at his broken and bloodied body.  My legs disappeared...

When the ICU social worker appeared, I felt relieved that I'd get answers and maybe a shred of compassion.  However, instead, I ended up in our sons bag that smelled of his sweat and bloodied, cut- off clothing searching for his insurance card. Obviously, this was her priority.  Next thing I remember after that was sitting in a tiny room with loved ones sobbing uncontrollably.

There is much much more to this story which I will tell when I am  rested.  The loving support and generosity of the MISS Foundation community and my friends have been overwhelming, vastly different from Cheys death.  Yet, there is much to say about the experience as a whole- one such concern being that we were never  notified by law enforcement or hospital staff despite the fact that
they had my sons ID and they knew my first and last name.  Rather, they left him alone in ICU and I
didn't make it to his bedside for 12 hours after the crash.  His coworkers' growing concern that he hadn't come to work spurned a search for my boy.  There is much more to the hospital and investigative story too...

It appears Ari will be okay, though neurocog assessments are challenging and he will have months of rehab ahead.  I always hesitate to give overly fluffy and optimistic reports because every day I meet parents who were assured that their children were stable or even recovered and then they, tragically, died.

The young driver of the other car was impaired.  I do not yet know his name however the news said he is is not expected to survive.  He was merely 25.  I ask that you hold my son and his two friends in your hearts, prayers, and meditations as they face a very long and arduous road to recovery.

I also ask that you hold the unidentified driver in your hearts, prayers, and meditations.  Whoever he is, for me, his life is worthy of our thoughts, and he and his family are deserving of my abiding compassion.  My heart is heavy for this probable loss...

Life is so fragile.  So very precious and fragile. And I have to say it: I miss you Chey.

Gentle Mother's Day to all the mothers who have lost their precious children, including the one who caused the accident nearly killed my son.


My goodness thank you to nurses Todd, Angela, and Rose and PCT Toni on the 8th floor here. You have been amazing and compassionate! And our experiences otherwise have not been so there.

Thank you to those who brought amazing basics like good water, broccoli, coffee, green smoothies, deodorant, dry shampoo, notepads, blankets for sleeping (hospitals are cold and their sleeping cots are, I'm sure, intended to dissuade others from cohabitating with patients for a week) and other essentials I'd never have considered.

Mostly, thank you for the love and prayers.

Update 5/12/14: Ari was given a medical clearance and has moved up to Sedona so his family can take care of him through his rehabilitation.  He'll be following up with the experts at the B.R.A.I.N.S.
Clinic and soon be in PT for his left leg injury.

We are trying to get some home health... at times the pain is unmanageable.

5/15/2014:  we we're readmitted through the ER at Flagstaff Memorial Hospital several days ago.  Home care did not go well and it was clear he was not release-ready.  However, the staff here has been  superlative, in both technical and human skill.

His two friends are doing well and expected to make a full recovery.

Sadly, I still have no information about the other driver but I continue to think of him often, holding him gently in my heart.

Please remember the parents who did not get to bring their children home from the hospital... please.

Holding Arman, you, and your precious family in my continued thoughts and prayers. Continued prayers for all involved. Jo, wishing you a gentle mother's day. So much love to you.

Dr. Jo. I was shaken to hear of your son's accident. I felt it so deeply. My family (myself, husband, 2 year old son and 20 week baby in my belly) were in a serious head on collision 3 weeks ago. It was awful crash. Seeing the wreckage of my car made our survival of the crash all the more amazing. The crash was on our son's 2 year birthday. It was not our fault. But reading how severe your son's injuries were, how badly hurt his friends were brought even more depth to my gratitude at not only surviving our head on collision but being remarkably alright given the high speed direct nature of our crash. I wish we could wrap ourselves and loved ones up in a protective blanket and keep from harm. I'm so sorry you are going through this. I'm so sorry your son and his friends are suffering. I"m so incredibly thankful your son and friends are healing. I hold you all in my thoughts.

You and yours and the rest of the families involved haven't left my thoughts. Wishing you all peace and comfort on this day and all the days to come.

Dr. Jo, as were countless others....I was shaken to the core when I learned of the accident. I find myself shaken again as I read your words, knowing that a mother will most likely say goodbye to get child as a result of this tragedy. I am incredibly grateful for the gift of Chey's brief life because it brought you into mine and brought validity to the brief lives of my daughters as well. I am equally grateful that Arman and his friends will eventually physically recover from this horrific accident and will continue to wrap them in a blanket of loving prayer asking with you. I am heartbroken for the mother of the other driver and will also be surrounding her in prayer of peace and healing that we grief stricken mother's know too well. Thank you, as always for baring your spirit and sharing it with us.

Dr. C - my heart weeps with you and your family; both in sorrow for all those involved and in gratitude for the grace of healing. Your family and the others will remain in my prayers and meditations.

You, Arman and all of you are wrapped in the love and prayers of so many who love you including me.

Gentle Mothers Day to you as well. What a strong and compassionate woman you are to pray for the driver at fault.

Hoping you receive the comfort and compassion you so readily share with everyone else. I'm sorry for all the fear and suffering that comes with such a trauma. Prayers for all the families and young people involved.

Shaking my head back-and-forth as I read this and tears fall down my face for you......and your Son. Continuing love and support for you both and the others too. I admire you lady!

Dr. Jo, my heart has been breaking for you all week. You and Ari have not left my mind or my heart since Tuesday. I am so beyond glad and relieved that he is recovering and able to go back to Sedona with you. I will continue to keep him, his friends, and the other driver in my thoughts and in my heart. I know Ari has a difficult road ahead. You are so loved! I would do anything to help you, if I could. Sending your family all the healing energy, hugs, and well wishes I have.
- Mandy

How awful for your family. I will certainly think of you in the coming days and weeks and hope that your son, friends & other young person make good recoveries xx

You and your family as well as the families of all involved have been in my thoughts. I'm so thankful that Arman and his friends are going to survive. I'm also saddened that the other young man may not. I have shed tears for all of you. I feel blessed to be part of such a loving community of souls who have come together through horrific experiences and continue to bond. I know you can feel the energy flowing your way from all of us who are more stable people because of you. Blessings...

I have been thinking of you non-stop. I am so relieved that Arman is improving and has come home to recover. I just have been so very worried for you. My love to you. So very very much. My love to all the families and to the other driver. Karin

Healing Light your way to all involved. You are beloved and held close by thousands- feel us surround you when it gets hard to breathe.

Dearest Jo...Yes, that call is the worst possible moment for a mother, and I've been holding all of you in my heart and prayers. I'm so sorry you had the SW encounter (where was the chaplain?!?!?!)but glad to know Ari is released and home. Sending so much love your way.

Many thought of you, Joanne, and wishes for your son! I'm so sorry you have to go thru this torture of the soul. Will be thinking of you with healing hugs and high hopes. Please keep us posted on Ari's health. We care! -- Sending love.

Many thought of you, Joanne, and wishes for your son! I'm so sorry you have to go thru this torture of the soul. Will be thinking of you with healing hugs and high hopes. Please keep us posted on Ari's health. We care! -- Sending love.

Dr. Jo, I am deeply sorry for your family and will hold you, Arman, and your children in my thoughts and prayers.