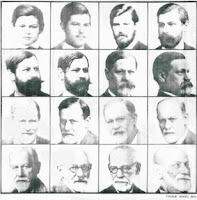 No one who, like me, conjures up the most evil of those half-tamed demons that inhabit the human breast, and seeks to wrestle with them, can expect to come through the struggle unscathed.  -- Sigmund Freud, Dora: An Analysis of a Case of Hysteria
Words have a magical power. They can bring either the greatest happiness or deepest despair; they can transfer knowledge from teacher to student; words enable the orator to sway his audience and dictate its decisions. Words are capable of arousing the strongest emotions and prompting all men's actions.   --Sigmund Freud, The Educator's Book

Freud was an esoteric man, publicly vilified and maligned, and woefully misunderstood by his historic peers and subsequently in many circles of psychilluminati.   Born in Czechoslovakia in 1856,  he moved to Vienna when he was three years old.  His lived his entire life there and would have died there; but the beginning of WWII prompted his escape. He took refuge from the Nazis in 1938 in England and died the following year there.  Several years later, his sister died in a German concentration camp.
Freud was one of the intellectual elite who, by the time he finished middle school, spoke fluent Greek, Latin, German, Hebrew, French, English- and a little Italian and Spanish too. At age eight, Freud's favorite authors were Shakespeare and Goethe.  (Sidenote: It's nearly incomprehensible for me as a mother of three boys living in Westernized American culture...). In other words, from his earliest days, he was somewhat of a sociocognitive anachronism.  He was obsessive, meticulous, controlled, parsimonious, obstinate, rigid, and compulsive (SE, IX. 169). He existed in a vicissitudinous state of both credulity and skepticism. He was, indeed and in every way, extraordinary.
I have always been fascinated with Freud and other radical eccentrics and misanthropists. Like his early defectors, Jung, Adler, and Stekel, I also recognize Freud's cardinal flaw- overgeneralization and absolute determination to be unquestioningly right. I could not disagree more with his theory of mourning; that is, his idea of cathexis and decathexis- the necessity for mourners to sever bonds with their deceased in order to reinvest in living.  And, I won't recapitulate Freudian theory that has been scoured and devoured by 20th Century psychologists.  The Oedipus and Electra complexes and his idea of the death drive, and the ensuing mass hysteria around those postulations, are well-known- and still ridiculed- throughout the general public.
Still, I believe him to be one of the greatest thinkers of the 20th Century. Freud contributed so much to what we know about the human psyche.  He taught us about neuroses and childhood development. He taught us the importance of maternal attachment and praise; and in fact, John Bowlby built much of his theoretical postulations on Freud's work.   He opened dialogue on dreams and symbology, and the unleashable power of the unconscious mind. He taught us about narcissism, melancholia, and identified what we now know today as posttraumatic stress disorder in combat soldiers during WWI (back then termed 'shell shock').  He gave us the Freudian slip and glimpses beneath the iceberg of consciousness: Freud left the world a powerful framework with which to understand ourselves- our true selves- psychoanalysis.
One of my favorite, dark Freud books is Civilization and its Discontents. This manuscript is not for the faint-hearted. It is Freud at his most misanthropic, pessimistic-self.  The historical context of societal and personal events during the writing of the book is essential to consider: His daughter, Sophie, died in 1920. He was diagnosed, not surprisingly, with cancer in 1923, and later that year, his beloved grandson died. Then, the second world war began soon after and Jews were being slaughtered, and he began working on the epic book Civilization and its Discontents. Within two decades, he'd lived through two world wars, one in which his religious group was facing extermination; now faced his own mortality; and he lost his daughter and then his grandson to Death. Given the historical context, is it any wonder, then, this book is a literary augur of calamity?
I believe every person should read at least two of Freud's books, if not for clinical purposes then for gain of political philosophy.  He is, after all, one of the great makers of our previous century.  And even in the darkest, dampest corners of his mind, Freud left room for the human spirit to succeed.  It's not an exaggerated or naive optimism. Rather, it requires maturation and responsibility: he calls upon people to become acquainted with themselves, to understand themselves.
He says that knowing yourself will help both individuals and society remain open to the vast possibilities of human expression, those beyond the impulsive drives- the negatives- those beyond the failures. We need not be limited by our past; rather, we can live authentic lives when we know ourselves- when we are honest- and transform pain and aggression into beauty and peace.
Id's a wonderful world, after all.

Ha! I love your posts. Very interesting to learn this about Freud. I knew of his pioneering in child development. But never knew he was a bereaved father and grandfather -- nor that the Civilization book came from these experiences. I just remember finding writings from that book to be incomprehensible when I was 20 years old. Wonder if the language would make more sense now that I'm living thru my own son's death?