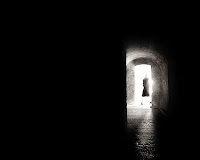 To love means to open ourselves to the negative as well as the positive-- to grief, sorrow, and disappointment as well as to joy, fulfillment, and thus an intensity of consciousness that before we did not know was possible.
Rollo May
Throughout human history, there has been a tendency to fear the unknown. On a macro level, this fear has fueled oppression such as religious intolerance where, for example, during the Dark Ages, countless women were drowned or burned at the state as "witches." Fear of the unknown has incited wars between tribes, hatred between countries, and violence between groups.
But fear is not merely a societal sarcoma that may manifest in subjugation and massacre; rather, evolutionarily speaking, it is a the most primal and visceral- and necessary- of human emotions. Fear keeps us safe from predators and protects us from endangering our lives.
If there is a knock on the door, I ask, "Who is it?" in an attempt to familiarize myself so that I feel secure, to ameliorate my fears and keep myself safe from potential harm. The focus of some neophobias is on people, while others fear new experiences, places, or even driving a different path to work. But fear can also hinder social creatures like humans. Fearing people can incite stereotyping and prejudice. The fear of traveling to new places can stunt ethnological appreciation and wisdom. Even driving the same path to the workplace everyday can be inhibitive: What more interesting landmarks might you notice by taking a different path? So, what do we miss by our fears and subsequent evasions of the unfamililar?
Grief was, at one time, an unfamiliar stranger. My primal response to him was terror and crippling fear. He controlled my thoughts, and I saw the world through his eyes, not my own. Panicked, I could not look this intruder in the eyes. I was paralyzed. I was certain that if my gaze met his, the abyss would, as Nietzsche said, stare back at me and overtake me. Like an ominous stranger at my door, I did not want to invite grief inside my home. I wanted to leave him out in the cold darkness of night where he belonged.
What I didn't realize then was that this stranger was a part of me now, inexplicably linked by experience. By leaving him outside in the darkness, he became the monster in my dark closet that would haunt me when my mind was still. And unwittingly, I made a decision in 1995 to surrender to that which I most feared. Part of that psychological relinquishment required that I accept grief out of the darkness and into my home.  We sat down together and sipped tea. We walked together. We sat on the back swing and watched the sunset.  I came to know and understand this part of me that felt so foreign, and I began to slowly see the value in the unfamiliar that he brought into my life.  He became more predictable and I feared him less. His roar softened and he did not need to yell for my attention any longer. We gazed into one another's eyes and I survived the facing.
I can honestly say that now grief, mostly, is my friend and an accepted, not feared, part of me. Now, I trust him to lead me into those places where, as May said, I can truly experience the pain, believing that beauty will soon follow, and knowing that I will experience the intensity of consciousness that far transcends the merely ordinary.

oh gosh, Joanne, yet another wonderful post! It helps me understand where I am, and gives me hope for the light ahead. Thank you so much.

That stranger named Grief, has visited many of our homes and not all of us have welcomed her in such beautiful and awesome ways. Many of us still resist him keeping him locked out. Some of us welcome her for a time only to kick her out on the street time and again. I am one who has not completely surrendered to the idea that Grief is my friend...but I am working on it. You are an inspiration! DS

Thank you Denise and Janis.