So simple, so chimp? 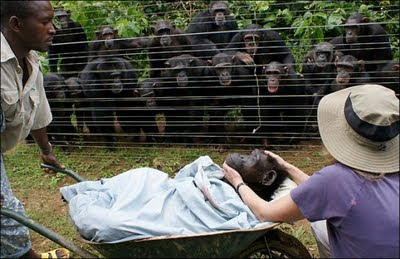 This amazing photo shows a group of Chimpanzees at the Sanaga-Yong Chimpanzee Rescue Centre in eastern Cameroon lined up solemnly near a fence after one of their fellow chimps died and is taken away. Chimpanzees are normally very noisy creatures, but after the passing of one of their fellow chimps, an elderly female named Dorothy, the entire group rushed over to the fence and watched in silence as her body was buried. They sat there by the fence with their hands on each others shoulders as if mourning and consoling each other.


The photo was taken by Monica Szczupider, and the article from Inquisitr, a worker at the rescue center. She said Dorothy the chimp was well into her thirties when she died of heart failure after being ill.

Given the way some families are treated after the death of a loved one, I wonder if we have evolved or devolved... see my other blog/rant for the day below: So simple, so human. Perhaps, it should have been titled: So simple, so chimp?
*Thank you Kim

Ah. That's so interesting. Perhaps we humans have something to learn from the animals aftera ll.