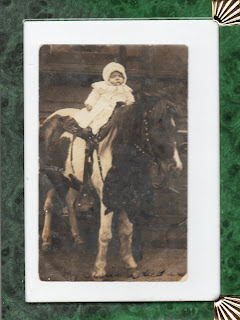 The past is never where we think we left it.
-Katherine Porter
Once upon a time, there was a very, very poor family who lived in Sicily. Rose and Nicola lived in a tiny cramped apartment in the largest city on a small island. She was a seamstress, and he was a barber who loved to play the mandolin. She was strict, direct, and detached. He was quiet, withdrawn, and private. They had three children: Mary, Josephine (my mother), and Salvatore. They had three children.
Times were hard in Sicily during the early 20th century. Child death was common; infant death rampant. The Grim and his ilk stood around every corner, pillars of salt, waiting with their baited breath for a communicable illness, or scarcity, or traumatic birth, or malnutrition. Then they rushed in, mercilessly, and took out, sometimes, an entire family.
I was cleaning out old boxes of family photographs just before my Nanny's death. She was in her mid-80s at the time. Photo after photo I searched in wonder. Some had edges worn from too much handling, others with faces faded beyond recognition. I stumbled on a photo of a baby on a horse.
"Who's this?" I asked her.
She took the photo and looked at it.
"That's Josephine," she said.
"Josephine?" I asked. "That doesn't look like mommy."
"Oh no," she said, "that was the first Josephine."
I stopped and looked up at her, breaking my gaze into the box, quizzically.
"What do you mean the first Josephine?"
In her strong Italian accent she explained that her first baby, Josephine, died at almost a year old. Pneumonia, she thought.
I nearly gasped out loud.
"So my mom is the second Josephine, named after the first?" I asked her.
She went on to explain that she had a second baby the next year, very soon after the first Josephine died. She named the second baby Josephine. The second Josephine lived for six months and died in her sleep.
At this point, I felt utter disbelief. I didn't understand. Two, wait, three Josephines? Enter confusion, frustration, and language barriers.
Indeed. It was true. "But - how could I not have known? Why didn't anyone tell me?" I thought.
Nanny's third baby, named Mary, lived.
Her fourth, she named Josephine again, was my mother. The third Josephine. My mother was the third Josephine.
My mother, Josephine the III, died ten years ago tomorrow. I don't know where she is now, but I miss her in my life. My father, John, died six years ago tomorrow of what I'm sure is a broken heart, four years to the day after my mother. He was the first John, the only John. I miss him too. His parents had 14 children, many of whom died long before they did.
My mother's parents had five children. Five, not three. Josephine, Josephine, Mary, Josephine, and Salvatore.
Times were hard, indeed...
+++++++++++++++++++++++++++++++++++++++++++++++++++++++++++
Dear Mommy,
Tomorrow it will be ten years, an entire decade, since you left this Earth. How did that time pass so quickly? I am a daughterless mother and a motherless daughter now. And I miss you in my life. There is so much I'd share with you, much of which I'd have once been reluctant to share. There is so much I'd say to you, much of which I'd have once been too fearful to say.
I know you loved me now. I know why it was hard for you to show me. I get it. And I'm so sorry I didn't get it then. It's clear, so very clear now. And I feel I could've made it right. Damnit, I really miss you and daddy. And the kids miss you so much. And Joe misses you. And Mark and Eda and John.
I don't know where you are, but I can hope- can't I?- that you are with Chey, and Daddy, and Peppino, and your two Josephine sisters, and Nanny, and Grandpa, and all our other beloved Dead.
My throat is tight with sadness and I will cry many tears in the next few days. I remember the look in your eyes at the hospital. I remember watching them resuscitating you. I remember the anguishing life-support decision. I remember much that comes back to haunt me every Fall. But especially this year. Year ten. An entire decade.
Remind Nanny that she has five children, not three, and that I always remember them all, will you? Tell her that the first Josephine's photo is in my butsudan next to Chey's ashes. Nanny will understand that now, I'm sure. And tell daddy that I love him very, very, very much and that I forgive him, and that I'm sorry I was so willful and stubborn. I come by it honestly, you know?
Mostly mom, if you can hear this, tell Chey that I love her with my entire heart. I miss her presence in my life every day. I wish it was different. And that I'm sorry I couldn't save her. Let her know I've finally forgiven myself for that. Finally.
Thanks for visiting my dreams so often. And remember that I love you and I know you truly love me. I know. I know.
Joya

Dear Joanne....Sending so much love to you. Remembering your mom.. remembering Chey.. Remembering your incredible family. I know with all my heart that your family is so proud of you . You remember, you teach , you love with your whole being. We are incredibly blessed to have you in our world.

Sending you lots of hugs and prayers.

Beautiful Story....we tend to forget how hard it was in the past, that mother's lost children that nowdays, could be saved.

Thinking of you and your Mum...it's my mum's seventh anniversary next week...like you, I miss her everyday.

It was even better the second time around. Thank you for sharing this incredible story