The Adams Family and the Ladybugs 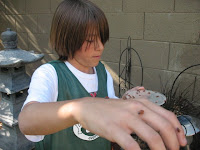 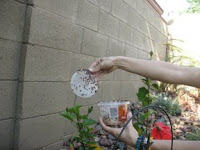 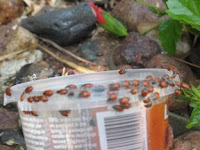 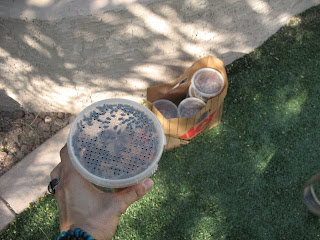 I have always been different. Even growing up, friends at school and even family, though they always liked me, thought me an odd-ball.
I became a vegetarian in a strict Sicilian household that ate 27 servings of meat a day; bacon and sausage for breakfast, cappicola and salami for lunch, pork chops and brojol for dinner. Even desserts might contain meat.  My parents thought my herbivorism was a "phase". That was 32 years ago. I never outgrew that phase. I would fight my parents when they wanted to use pesticides, and I'd even try to catch scorpions to put them outside, resulting once in a sting that would cost me two days of school.
Friends also had good reason to lift a nostril at me. Throughout high school, I would walk cautiously around bugs as I traveled from class to class, careful never to step on one. I would, at the outrage of many girlfriends who spent the night at my house, catch spiders in my room to release them outside.  After Charlotte's Web, who wouldn't?
I couldn't stand the thought of harming other creatures. I've always had a sense that humans should be good stewards of the earth and its creatures.
Well, it's been a very long few weeks, and I'm finally rejoining the world of the living. Last night, my two youngest and I escaped the house to which I have confined myself the past 15 days. We saw a movie that, for me, required no cerebral activity: The Forbidden Kingdom with Jackie Chan and Jet Li.  Now, I will admit, I'm a big martial arts fan, having received my own purple, nearly made green, belt years ago with two great senseis, Dino Homsey and Tim Wion.  I'm also very fond of Eastern culture, as the philosophy of harmlessness and kindness resonate with me.
Then, today, I watched Seven Years in Tibet, at the behest of my daughter, a Brad Pitt fan. Obviously, the film's setting was in Tibet's capital, Lhasa.  A young Dalai Lama, the 14th Holiness Tenzin Gyatso, did something that would make perfect sense to me. As they unearthed worms in order to build a structure for His Holiness, he insisted that each and every worm must be relocated to a safe place to spare their life. This was so beautiful. The idea that even a worm is worthy of respect.
That brings me to this afternoon when my daughter and I stopped by the hardware store for some wood. At the counter, I saw three plastic containers of "Ladybugs".
"Oh, mom," she said, "ladybugs!"
"Wow," I said, picking up a plastic container with about 100 ladybugs.
Then, because I just had to look, I noticed they were dying.
I said, "Oh, we have to buy these to set them free."
They were not inexpensive. But I recognized this act as consistent with who I am and have always been. So of course, I thought, it's what I must do.
Then, I looked closer. There were four more plastic containers. Then three more. Then two more. In all, we ended up buying about 1000 ladybugs, begrudgingly, I admit, with some mental, self-flagellation going on in my head. Impatient customers behind me in line were looking at me like I had green skin and antennas poking out my limbic region. They joined in silent castigation with the cashier as I clumsily grabbed every bug bucket I saw. And my daughter, despite my insistence to the contrary, felt compelled to text all her friends to tell them about her weird mom.
So, I set hundreds of ladybugs free in my backyard with my 11-year-old, his eyes like a toddler at Christmas, as grateful polka dotted creatures crawled up our arms and in our hair.
And I felt good. And I smiled. And I laughed; something I haven't done for more than two weeks.
Even the earth's smallest creatures matter, and today, we helped to set each other free.
All for less than the cost of an hours worth of psychotherapy...
"...The more difficult the journey,
the greater the depth of purification."
From Seven Years in Tibet

YOU ARE AN ABSOLUTE NUT....BUTH THAT'S WHY I LOVE YOU SO MUCH!
Mario

So your new title is:

I love reading this post. Back when I had flower gardens in planters on the deck at the old house, Hawk and I used to go to Fred Meyer and buy up all the ladybugs they had in the garden department and set them free among the flowers. :) That area was like "Kota's garden" you know...always felt like a right thing to do there :)

You rule!!!
xoxoxox
me