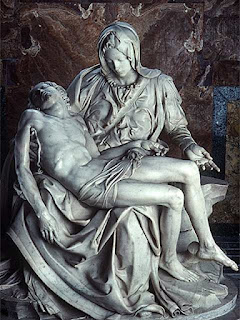 Michelangelo's masterpiece La Pieta has always spoken to my heart. A grieving mother holding, tenderly, the lifeless body of her son- Jesus draped like silk across his mother's womb- it is an evocative image for both Christians and non-Christians.
Yet, after my daughter died, this image assumed a wholly different meaning for me. I remember holding my own dear child in my arms, her body lifeless, and my heart aching. I understood La Pieta- the pity or mercy- in a way I never imagined.
I just finished a recent, empiric study with my colleague, Dr. Frederik Froen, on mothers who hold their children after they've died. There has been some debate, particularly with stillbirth and much-older children (teenagers and adult children) as to whether or not this should be permitted in hospitals.  Some hospital staff are concerned that it may be too traumatic for families. Others believe it will prolong or protract grief.
I say that this decision is one for the mother herself (or father).  Who has the right to forbid a grieving woman from saying goodbye to her beloved child?  Who gets to make that choice? A doctor? Nurse? Social worker? And where do they get to go when they leave the hospital? Home, probably to their living child/children.  They are not cast with the burden of lifelong sorrow, so why should they make such an important and irreversible decision for the woman?
This feels like a double-standard in our society. La Pieta is visited by millions around the world in St Peter's Basilica. Millions come to see a woman- a mother- and her baby son, Jesus- sculpted eternally in her arms. Religious icon or merely an artisan's historic expression, this work is revered by many as one of the most solemn and sacred "creations in the history of art" (Flach, 2002).   It is a moment between mother and son that has been captured in stone and that is honored by others around the world.
In today's world, this very important decision, one that will be the most sacred and solemn moment in the life of a mother, is debated by the sterile institution of the academy and medicine, those who wish to hold power over such choices.  It is not for them to adjudicate. Instead, this weighty decision should be left to her, while having supportive others who will patiently guide her to  making the right choice for her, both in the short and long term, out of love and not fear.
In fact, the study's results (we just recently submitted to a medical journal) suggested that caregiver attitude played an important role in the decisions of mothers as to whether or not they hold their child. The mothers, overcome with fear and traumatic responses in the brain, cannot think clearly, and are unable to understand how their decisions today will affect them in one, three, or twenty years.
I can think of no greater imperative than this:  others should honor the beautiful and everlasting relationship between all mothers and their children who have died.  They are all deserving of both mercy and pity...

Joanne, so many thoughts are swirling around my head regarding your post. I wonder about cultural differences -- is it only in the U.S. that there is debate about whether parents should be able to hold their dead child in the hosptial? And I wonder about why a wake or viewing would be different than allowing a parent to hold their beloved child in the hospital. Very interesting.

Excellent question, Randi. So excellent that the diatribe has begun...

We were completely guided by our carers. Thankfully, they were incredibly supportive and non-intrusive. We not only held our children but we made death masks of them. For each child, I held them on my lap and drew their portraits. We dressed them for their funerals. With Soren we were not allowed/invited from the funeral home to participate further which felt very wrong. With Imogen and then Heloise, we changed funeral homes. We put them in their coffins. We closed the lids. We carried the caskets ourselves. This was our obligation to our children, not someone else's. It felt right and true. Excruciating, yes. But ours. The Pieta means a great deal more to me now, especially how Mary was able to care for her son after death. Thank you Joanne, what a great blog.

Karin,
Carers can make all the difference between a painful but gentle experience and a painful and monstrous experience. I'm so sad for the deaths of each of your children, and I think it's incredibly beautiful how your caregivers guided, supported, and loved you and Kieron.

On Pentecost Sunday in 1972 I heard the news that an apparent madman claiming to be Jesus took a hammer and mercilessly struck the Pieta 15 times. The damage was sickening, the blows devastating and seemingly mortal. Mary's nose had been completely severed, and her left eyelid, neck, head and veil all suffered severe damage. Her once flawlessly smooth face had been pulverized. The damage was thought to be irreparable.

I had seen the magnificent marble statue as a boy ieight years earlier when in 1964 it came to the New York World's Fair as the centerpiece of the Vatican Pavilion. It had impressed me as no other work of art ever would. So when in my teens I heard news of the traumatic assault I wept and wept and wept. For days I was in a daze that was broken only when I finished writing a short poem of lament and tribute.

Twelve years later in 1984 -- twenty after my first in-person encounter with the magnificent grieving mother and lost (adult) child -- I crossed the Atlantic for the first time to live, work and study in Rome. Upon my arrival the first thing I wanted to do was to get to St. Peter's to see the Pieta. I had heard it was meticulously, devotedly and mindfully restored -- and very successfully. I had to see for myself. To my delight reports proved true. Though now behind bulletproof glass, the magnificent Lady and her broken, dead Son were there to venerate, adore and take delight in. I did so and have many times since.

Restoration is hard work. Fortunately for art there are schools where masters at the craft train others to do this sort of thing. In very many cases, if handled with meticulous loving care and devotion, there can be good results. Some art works -- frescos that would otherwise crumble from within if only restored on the surface, for example -- need to be removed and shored up before being replaced in their original place. These are often stronger and more beautiful than ever as a result. Others just need slow and painstaking attention. Not all can be fully restored. A rare few are more beautiful than anyone can recall for the meticulous attention.

I have always been most impressed with those who endure, who stay the course, who are willing to persevere and create, or re-create, beauty over the long haul. This takes a measure of trust and hope and willingness to risk. It takes tenacity. So often it can seem easer, especially after what feel like hopeless failed attempts and possibly (probably) bouts of depression, to despair or find reasons to become distracted with other important matters.

While we would never wish the tragedy of grave loss and grief upon anyone, from them the most profoundly beautiful sort of life can be brought to flourish. This is never life alone, separate, lived in isolation. Life is not really life for humans without love and connectedness and intimacy. And it is never all alone and rarely if ever just one-on-one.

What makes Michelangelo's Pieta so compelling to me is the "interconnection." It is the connection between Mother and Child. But it is also the connection between A/artist and creation, and also between each of us -- individually and corporately -- and that magnificent artistic creation too. The Pieta invites us to inter-being, to a shared experience and burden of loss and also the original and ultimately restored blessing.

It is my contention that by sharing in a common nature, all deserve mercy and pity and are called to it. All deserve compassion and are called to it. All deserve love and are called to it. If this be our stance, in time, with loving care, mothers will not be left alone and isolated in loss and grief, mother and child will never be truly separated but always honored and reverenced as inseparable. And that which seems lost with the passing of time will not only be restored but somehow made more whole, human, and beautiful than ever. It's my experience that this awareness and such aspirations as these are the wellspring of hope worth living for and devoting oneself to.

Verbumicon,
This is one of the most beautiful responses on a blog I've read. Thank you for so many things.