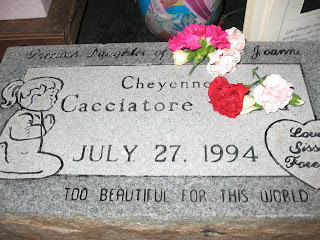 On My Terms
Every day he got up.
Before sleep wore off, he was who he used to be.
Then, as his consciousness woke, it was as if poison seeped in…
and he moved and he moved and he moved.
But no amount of movement being enough to make up for it.
The guilt on him, the hand of God pressing down on him saying,
You were not there when your daughter needed you...
And as Flora twirled, other girls and women came through the field in all directions. Our heartache poured into one another
like water from cup to cup.
Each time I told my story, I lost a bit, the smallest drop of pain.
It was that day I knew I wanted to tell the story of my family.
Because horror on Earth is real and it is every day.
It is like a flower or the sun; it cannot be contained.
Alice Sebold, The Lovely Bones
On a searing July day in 1994, it was my turn to become familiar with horror on Earth, and it became my every day reality.
Death trespassed on my body. Just moments before I was to bring forth life, Death came into my body and without permission stole my most precious piece of my self. My beautiful girl, all 8 lbs. with long, piano fingers, ebony curls, and fat creased thighs and wrists, succumbed to that which cannot be contained. My body was ready for her arrival. My brain made space for her. She belonged there, right there, with my other three who'd arrived the same way in 1986, 1988, and 1991. The trauma of experiencing birth in such intimate proximity to death cannot be described in any language.
It would be years before I would come to terms with all that I had lost- and gained- in particular, the newfound guilt- an appendage for my body's betrayal of maternal duty (I’m not sure, even today, that my whole being has accepted the terms of this unilateral contract).

Hurried and unknowing voices told me what I should and shouldn’t do; how to mourn and how not to mourn; when to remember and when to forget; what was good for my children and how I would surely cause them irreparable harm. My loss- my grief- was being managed by others, coerced into convivial proscriptions of comfortability.

And Death, like a neglectful parent both loved and hated, held the key to both my freedom and my imprisonment.

They told me it would be bad for my children to see her lifeless body. It would cause them grief beyond repair. How would I know it was the not-seeing that would cause so much greater harm? I’d wanted to bring her body home for a day, show her the room that was to hold her cradle. Let her witness all the hours I’d meticulously spent cutting brown bear borders against the cornflower blue walls, until my fingertips blistered. They said I couldn’t, I shouldn't, and I didn't.
I’d wanted to cremate her long ago, but I was told it “wouldn’t be good” for me.

It would be nearly 14 years before I would have the chance to right many wrongs. On April 11, 2008, I had the body of my child exhumed from the red earth. I watched from a respectful distance as my brain rewound the tape that played endlessly through the years. My neurons fired with fresh but familiar pain. On this day, I would take control back of my own experience of loss. And for one week, I had the my chance to experience my own trauma and regrief on my own terms.

It’s been much more difficult than I could have imagined it would be, the innards of my grief raw and exposed again to the light. But it was my way, with no one telling me I couldn’t rock her in unison with the neighbor's Cottonwood tree that swung in the wind. No one telling me that a one-way conversation with my dead child's own lovely bones would be plain crazy. No one telling me that I should scurry my children out the door, protect them from the pains of loving, shelter them from grief.  I held power over my experiences this time.
And so I was able to burn my sage, and follow my mind down the rabbit hole. I took my time, fell asleep with my hand on the velvet pink box, where I'd earlier tied purple bows in knots to abate the morbid inquisitions of others, and myself.  And I captured my first photograph of all five children gathered together, four of whom emerged from my womb safely and one who would never smell the lavender or rosemary in our yard. Still, there was no one shielding me from my own willing, and even unwilling, suffering.  And for this, I have much for which to be grateful.
Life is painful. Yes, it’s also joyful at times; but grief comes with it. It is unavoidable. The love you feel for someone is commensurate with the pain you will suffer when that person has died. And my suffering is, like the love I have for my dead child, inexhaustible and sempiternal. I’ve learned that suffering is not so bad, so long as its done in my own time, on my own terms.

Reading your post here -- communicating with you this past week in photo and words -- I have very much felt the vibes I feel when watching Losing Layla. The empowerment Vanessa's and Layla's images emote from the screen -- the ache and yet the full knowing that this is as "right" (when there is no right about it) can get for me...

My whole heart to you, Jo. This is the point to it all, isn't it. To set up sacred space in which the bereaved can feel okay about doing whatever is right and most empowering for them. And whatever we need to do to hold that space -- make that space -- model what that space can look like...

I feel like that was the point (where there is really no point) to Kota's life and death. He is my "go this way, not that way" sign. He taught me what *choice* really means.

Just a million xoxoxo's to you!
And a thank you for holding sacred space -- for yourself, for Chey, for all of us.
me

I'm so sorry you were denied the right to cremate her back then, and so glad you have the chance to do what you want now.

And I'm very glad to have found your blog.

So many things to say to you and such a tiny mind with which to say it.

In my life, the worst parts of it, the deaths, the imaginable horror of knowing what we are capable of doing to each other has all been for a reason. Each thing, in time, taught me lessons I certainly did not want to learn. I balk to this very day at being the man I know I should be.

Nothing about you surprises me. Having read this posting I know why you are who you are. It is a terrible and wonderful thing that made you what you are now.

Through your inspiration I only hope I can become what I should be.

With great love and appreciation.

I'm so glad you're grieving on your own terms. That and the fact that you had the opportunity to "right many wrongs".